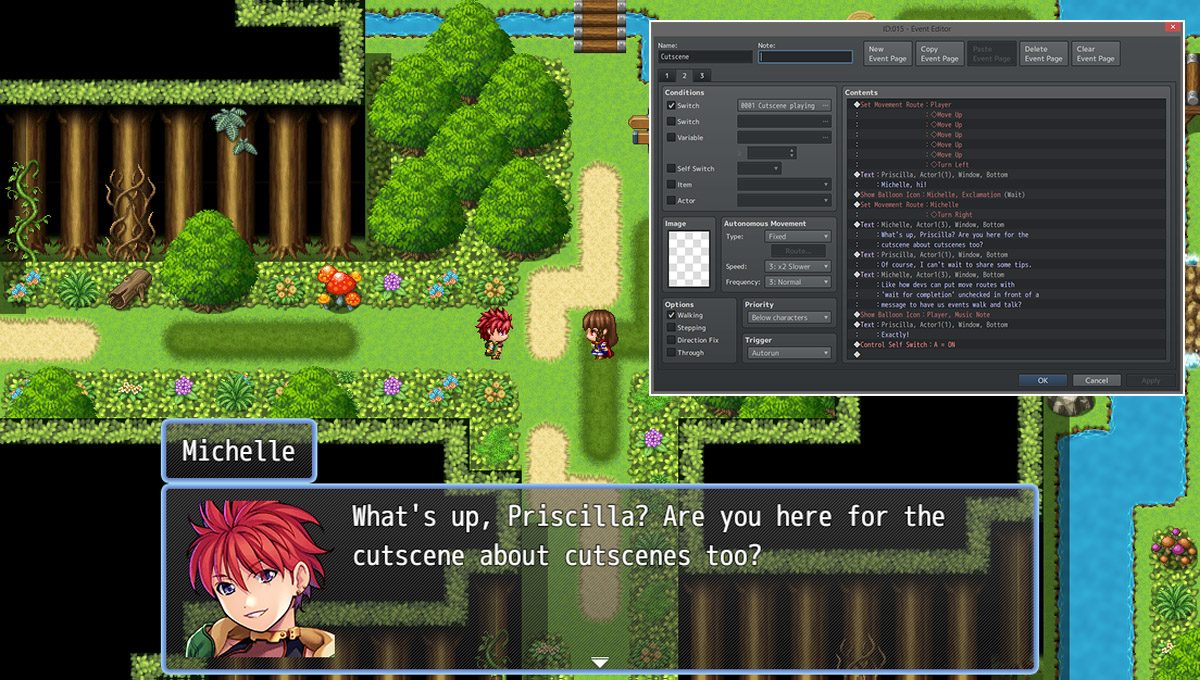 Basic Anatomy of a Cutscene

Cutscenes are a vital part of most games, drawing the players into the game’s story and giving them a break from the action of battles. But sometimes it’s difficult for new developers to get the ideas from their heads into the game itself, so let’s take a look at a few things to keep in mind while eventing cutscenes.

There isn’t one perfect way to create cutscenes, since every game dev finds their own method that works for them. Some devs plan out the entire scene like a screenplay outside of the engine and make their last step eventing it, while others go into the cutscene with just a vague idea and make it up as they go. Then there are the devs who work on the cutscenes on-and-off, eventing the most important parts first and then coming back to it later to add in details and polish. If you’re new to game making then try a few different ways to work on cutscenes and see what works best for you.

Since there’s no way to explain all the possible cutscene making methods, let’s instead look at some of the important details to think about that can make eventing scenes easier. ‍

All of us have seen cutscenes before when playing games, but let’s make sure we’re on the same page and go over what a cutscene is in an RPG Maker game. Cutscenes are events that usually move the game’s story forward or give the player some world-building knowledge. Often they only play once, since the player doesn’t need to see things like the game’s intro repeatedly.

While there isn’t one right method to working on cutscenes, there are a few things that are good to keep in mind no matter how you like to event the scenes:

Cutscenes can be as long or as short as we need them to be, but they all share three parts: the trigger that starts the cutscene, the scene itself, and the ending.

The trigger is what makes the whole cutscene start, so it’s important to pick the right one for your situation. The tooltip when you hover over the section in MZ explains each, but let’s take a look at them here and consider where we could use them for cutscenes:

Player Touch and Event Touch have similar uses, but the seemingly minor difference between having the player start the cutscene and having the event start it makes them work for very different situations. Using Player Touch for an event that chases and attacks the player means that as long as the player doesn’t turn to face the event the cutscene won’t activate… Which would make the whole enemy ‘attack’ a lot less dramatic.

While Parallel can be used with cutscenes, it shouldn’t be your first choice since it doesn’t stop player movement. So if the player really wanted to they could wander off while the cutscene is playing, missing out on any cool NPC sprite behaviors you put in the scene or even causing the game to freeze because the player had moved out of the expected spot and caused a move route to force the player to run into a wall. In most cutscene cases, Autorun is a better choice over Parallel. With the trigger for the cutscene picked, let’s move on.

Eventing the scene itself

Making a cutscene follows the same rules as normal eventing in RPG Maker, which means if we’ve been working with events to make small things like on-map battle encounters or treasure chests then we’re already familiar with event commands. We do need to keep one big difference between random events and bigger cutscenes events though:

Only one event should control the cutscene and all the events involved in it.

Sometimes we get so invested in our characters that we forget that at the end of the day, all of them on a map are just events and those events don’t have to control themselves. So instead of trying to make all the events move on their own at the right times we need to remember that we can create one main event that controls everything that goes on in the cutscene.

Sometimes after we’ve created the event that will control the cutscene, it can feel a bit overwhelming to stare at the empty contents page and not know how to make the scene look just right. When we feel stuck working on a cutscene, it’s important to keep one thing in mind: the cutscene doesn’t have to be perfect from the start! It’s completely fine to just put in the important details (like telling the player where to go next or start a boss battle) so that it’s playable and leave the cutscene unfinished until we get a burst of inspiration.

Gameplay mechanics improve with time and polish, and the same can be said for cutscenes. If you’re getting frustrated with how much time you’re putting into a cutscene, take a step back and work on another part of your game. Leave yourself some notes in the cutscene so that you know where it still needs work, but don’t worry about it being unfinished. The cutscene will still be there when you come back to it.

Once we’ve made our cutscene the last thing we need is a way to end it and in most cases make sure it doesn’t replay. After all, it’s not a lot of fun for the player to rewatch a scene they just saw because they accidentally clicked and restarted the event. It’s easy to solve that issue though, all we need to do is have a switch or self-switch turn on and activate another page in the event that has that switch set as its Conditions. By setting up a page with self-switch A chosen as the page condition, we can stop the cutscene from being repeated by turning on self-switch A at the end of the scene.

One big mistake when ending a cutscene (which I made a lot in my first game) is using the Erase Event command. It does technically end the cutscene, but it’s not as permanent as most devs want for cutscenes.

As the tool tip says, using Erase Event would make the event reappear later on, possibly causing the player to see the game’s intro again when they return home after defeating the final boss… Definitely not what most of us want happening. So make sure to use a permanent option to end a cutscene, and not Erase Event or even an item/actor that could be lost later in the game.

And with the event’s ending set the main parts of a cutscene are completed! Cutscenes can seem complicated, but they can be broken down into much more manageable parts. Be proud when you’ve made the cutscene playable and don’t worry about making it perfect on the first try.