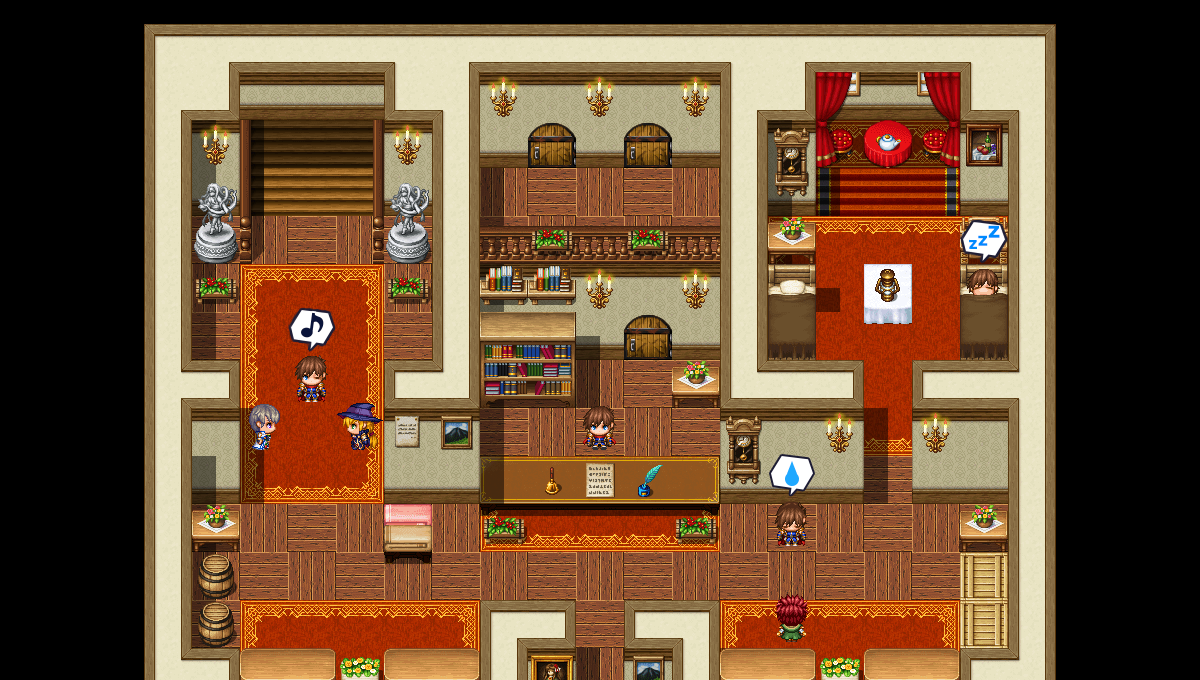 Creating Behaviors from the Damage Poses

MZ gives us the choice between three different damaged frames for our sprites, which is great for some variety on a battlefield! But there’s so much more we can do with them if we just edit the sprites a little bit. So let’s take a look at how we can make a few new behaviors out of the damaged sprites.

For this tutorial we’ll be using Reid as our model, but of course you can do this with any sprites that you think need a bit more movement for your game. We’ll be making some simple behaviors this time so the only parts of Reid’s sprites are the four frames in the grey boxes about, his standing pose and the three damaged frames. We also will be using an art program that lets us select parts of each sprite and can show a 48x48 pixel grid, so get ready to boot up photoshop, gimp, or your art program of choice.

Let Reid sleep in a bed

First, let’s make a behavior for all those times your poor hero needs a nap. While we could just use one of the damaged frames as-is, it means that your hero is just laying on top of the bed and doesn’t get to enjoy sleeping under the sheets. So let’s fix that.

We only need two things for this behavior: the first damaged frame where Reid is laying on his back and the bed that he’ll be sleeping in (in this case, the one with brown sheets). Since the beds all have slightly different positions for the sheets we want to make sure that our sleeping sprite will properly match up. Once we have our bed and the laying down Reid, the first step is easy: put Reid on the bed. This is easiest if you have the 48x48 pixel grid showing, so that you can be sure that Reid is where he should be.

Now that Reid’s laying on the bed, we need to adjust where he is so that his head isn’t hitting the top of the headboard. In this case shifting him down a few pixels puts him in a much better spot.

Next we’ll look at where the brown sheet is and erase all of Reid’s body that would be underneath it. I did it by selecting all of the sheet and just deleting the parts of Reid that were in that selection, but you can erase it by hand if you prefer. Once it’s all been erased, we can put Reid’s sleeping frame into a full spritesheet.

And with that, Reid’s sleeping behavior is done! Since we don’t want the sprite to be shifted when we put it into the game, we just need to make sure to have a ! at the start of the image’s filename (if you want a refresher for what ! does, make sure to read Avery’s explanation on characters).

Sometimes you don’t feel like making a message just to have your hero say “ok”. So instead, let’s make a nodding behavior we can use instead (as a bonus, it also can work as hanging their head in shame, perfect for when your hero makes a mistake).

For this behavior we need both Reid’s standing and damaged sitting frames.

Since we want Reid to be standing while he nods, we need to be able to put Reid’s damaged face onto his standing body… Which means we need to remove his head from both bodies. We’ll use the sprite’s chin as a marker for where to separate the head from the body, making sure to select all of Reid’s hair along with his face. Make sure to save a copy of these split up sprites, since they’ll come in handy later!

Now that we’ve separated them, it’s easy to put the damaged face onto the standing sprite. To add a little bit more movement to the nod I put the damaged head a few pixels lower than the standing sprite’s head, and in Reid’s case it means his cape isn’t visible under his chin anymore. This is all we need to make him nod, but I’m not happy with how shadowed his face is so there’s one more optional step left.

Last thing we’ll do is get rid of the shadows on Reid’s face. We’ll do this by matching the lighter colors used for the skin and use those to replace the darker ones, so it’s closer to the standing head when it comes to the shading.

And with that done, this nodding frame is complete! To make him nod we just need to swap between his standing frame and his nodding frame, which is as easy as having him turn in place if we put both onto the same spritesheet.

Give Reid the option to sit

With Reid now able to sleep in a bed and nod, he’s ready to face anything!

...Well, almost anything. Some scenes just call for our hero sitting down, either when they’re relaxing or need to sit in a war room while going over a plan for the final battle. Luckily, this is pretty easy to do if we’ve already made the nodding behavior and saved Reid’s separated head and body.

We put Reid’s head on his body! It’s as simple as matching up his chin to his cape. However, if you look at this preview you’ll notice a tiny grey arrow. Because of how Reid’s hair fell when his head was down it covered part of his shoulder armor. While we could use this sitting Reid right now, we’d end up seeing some of the map through his shoulder which would be a bit odd.

So our last step is to fix up any little spots that look funny. Since Reid’s armor has a hole in it, we need to patch it up. Since his armor is the same on each side, we can just look at the full shoulder piece and copy it to fix the holes.

Now that we’ve fixed up any issues, Reid can now sit back and relax!

Lastly, let’s take a look at a small way to add a lot more little details to your cutscenes. Not every cutscene requires a dramatic behavior, sometimes all it takes is a little wink.

Small changes to the eyes can really change the characters emotions, so we can think about how to make a few options to help make the cutscene even better. We’ll start by looking at the eyes on the damaged frames. The laying down and sitting damaged frames each have their own way to show closed eyes and they both can be used to add that little something extra to your hero.

Now that we’ve learned how the damaged sprites handle closed eyes, we can copy those onto Reid’s standing sprite. Simply by adding those we can make Reid look deep in thought, tired, or even a happy-go-lucky by shutting just one eye. There’s also the option to look at how some of MZ’s the other default sprites do eyes and copy them onto your sprite. Reid looks a lot angrier when his eyes are replaced with the dark elf’s eyes from the evil spritesheet.

The different eyes can be used in a similar way to the nodding behavior, so you could even make your characters blink during a cutscene if you want.

These are just a few ways you can create brand-new behaviors from the damaged sprites! With more time and effort you could make some truly incredible cutscenes, so use this tutorial as a stepping stone to start creating the perfect behaviors for your game. Now that you’ve given these a shot, what other behaviors could you imagine making out of damaged sprites?