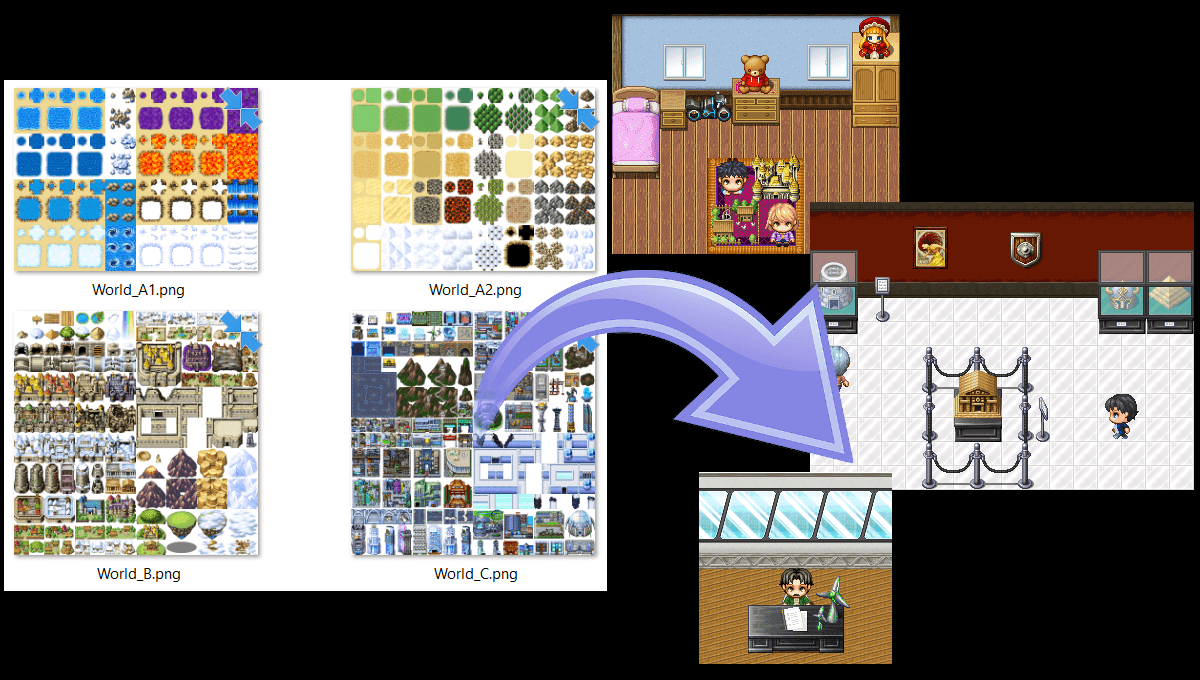 Whenever I start a new project, my first thought when seeing the world map tiles is “Nah, I won’t need that here”... if I want a world map, I’d probably parallax it to have it really fit the world I have in mind. But on the other hand, it’s a shame to just neglect these neat tiles, even if you don’t plan on having an actual world map. So let’s have a look at 6 ways to (mis)use these tiles!

1. Reusing the autotiles on outdoor maps as variations

This tip was already mentioned in the “How to Map a Desert”-Tutorial, but it is worth repeating it anyways!

For A1, besides the clouds everything here is kind of plug and play - the swirl could be a fun addition in a rafting minigame and the tiny dead trees on the swamp could be very tiny dead trees.

Before you throw out the A2 autotile sheet, have a closer look!

In the red rectangles I see amazing ground variations to make my Biomes more interesting, with great lava rocks for a volcano or a fire cave or just plain grass alternatives!

In the green squares I see neat rocks that I could use for decoration e.g. on cave or mountain maps or bases for rock variations I can edit out of them!

Let’s move on to the B Sheet, and there are more things you can repurpose!

The big rocky mountains are a great desert decoration! The Lake and the frozen lake could double as puddle and frozen puddle, the bridges are a bit narrow but that might work perfectly for a place where people just have a cheap wooden bridge and the snow and rock pile could work as well on “normal scaled” maps!

The same goes for the C sheet. Some rocks, statues and bridges would work well on the other scale as well - of course the statues would be smaller, but depending how and where they are used that should be fine! The ground plate there would also make a neat temple or cave addition. The huge gate could be a small door - as it has the size of a regular human character. I think you could even extract more tiles if you edit them a little, such as the other gates or the neon sign.

You could go somewhat further and use the separated treetops as smaller bushes or isolate the smaller lakes from the towns as puddle variations.

Need more decoration for the kids' rooms in your game? Well… they are the world map resources!

If you remove the town's “ground” (I did so in graphicsgale simply by drawing over with the pencil tool) you have a neat playset for your kids - and there are even chicken included! Some of the buildings are far too big, but the smaller ones on the islands work great as well!

You can also use the world map vehicles as toy vehicles, as I did with the motorcycle here. If you want a different, even smaller, scale, you can try VX/Ace vehicles and world map tiles for MV/MZ.

Sometimes you have your characters stand at a coast line or on a cliff and stare into the distance, and there is usually--- nothing.

This map was made by me using resources from multiple RTPs and artists, but you can clearly see where I just placed the world map tiles near the horizon to give a feeling of “distance” and perspective.

You can also use these when you need to map a view from a mountain for example.

In both cases, I think the best solution is to “map” the background and use it as parallax or parallax it from the start.

4. Background of an airship

This idea is not by me and so is the screenshot, but not mentioning it would maybe prevent you from not seeing this opportunity:

This map PandaMaru released in the screenshot thread shows a perfect out of the box use of world map tiles.

Airship, plane, hot air balloon, there are plenty of possibilities to fly over a map and this setup enables you to show your world from above and have a cutscene going at the same time!

This might sound oddly specific, but maybe you have a museum in your game? Have it be a modern game with a heist theme, a place for a date or even a small museum in your fantasy world where your player can get some background information about your setting - the world map buildings make great model buildings to be displayed.

(I used my own museum tiles here)

And even if you don’t have a museum… a model building is a great decoration for any “boss's office”.

Here we see a boss of a company for green energy, as we can easily guess by the windmills on his table. This is not limited to decoration. Maybe there is a model of planned construction?

We have talked about a lot of ways to repurpose most of the tiles, but we have not really talked about the trees yet. If there was just a way to include tiny trees onto your maps…

Of course, you can use them in models and toys as well, but there is another neat way to use them.

If you want some simple bonsai trees, you just place the tiny world map trees - no matter whether A or B/C/D… in a plant pot and you are done!

Personally, I think it’s amazing how much you can do with minimal or zero edits and some creativity. There are probably even more ways to use the world map tiles even when you don’t have an actual world map, and maybe you can share yours with us at some point as well!