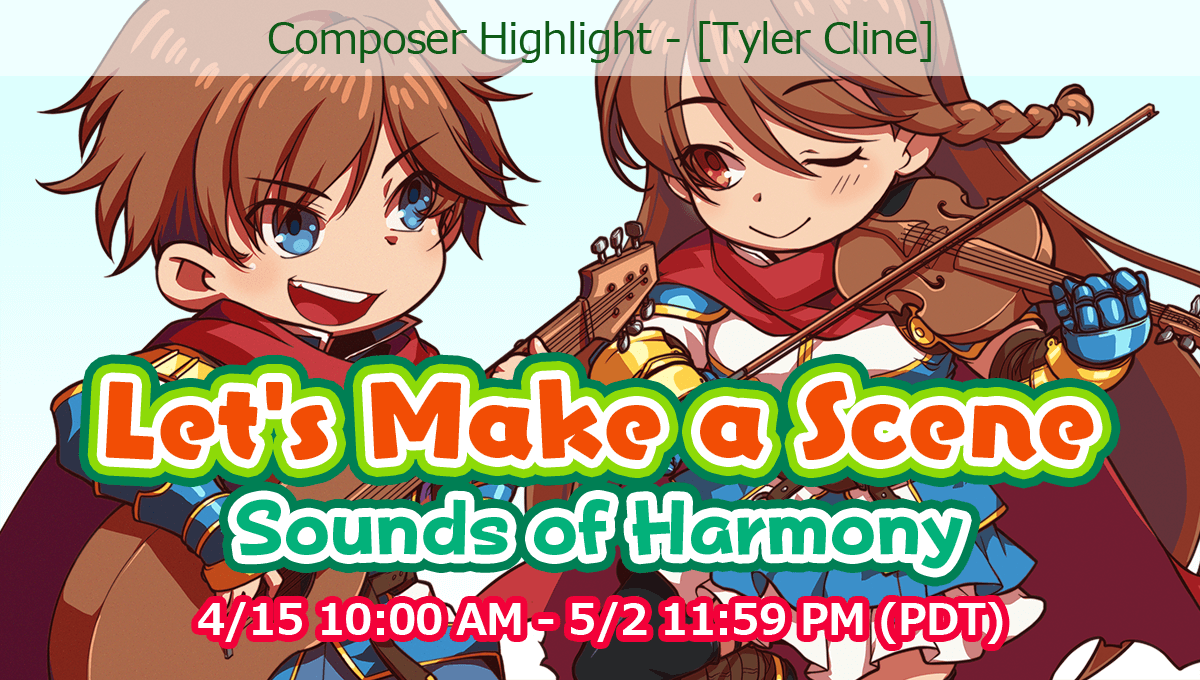 The Let's Make a Scene: Sounds of Harmony contest continues, and we've already looked at 2 of the composers involved. Today, we'll take a look at the third composer that helped make this event possible: Tyler Cline.

Our third composer for the event, Tyler Cline hasn't had as many packs hit the store, but that doesn't mean the packs are any less amazing. He was one of our first choices for the contest, so let's here what he has to say about himself and his contribution to the contest.

Hi Tyler, thanks for taking the time to talk to us. First question, how did you get involved in making game music?

I first fell in love with game music when I played The Legend of Zelda: Ocarina of Time as a little kid. That experience stuck with me and gave me a fascination with great game music. Since then, I’ve pursued a life of music all the way up to my current role as a game composer.

I make game music because I want to tell stories. Rich, deep, impactful stories in the way that only games can tell them. This guides everything I do and create, as well as the people I work with! It’s been a pleasure knowing that my music is out there with RPG Maker helping people tell the stories they feel are important.

‍You've selected The Voice of the Wind from Tyler Cline's Cinematic Fantasy Music Pack for your contribution to the event, what was the inspiration for that piece?

“The Voice of the Wind” started out of a template for a trailer I made over a year ago. I loved the sound I had for it as well as the way it built so much intensity… I didn’t want to let it be a standard trailer track and be done! I converted it into a game track as I feel like I didn’t have anything else like it available in my other work.

The name was inspired by the book “The Name of the Wind” by Patrick Rothfuss. I fell in love with that book and it served to inspire the sound of the track as well. I chose this track because I felt like it gave a lot of opportunity for some great moments in cutscenes and trailers and would give a lot of energy to whatever it accompanied.

‍What about the full pack it comes from, Tyler Cline's Cinematic Fantasy Music Pack, how did that come together?

I love cinematic music. I love big sounds and the way they can absolutely fill up your ears. Honestly, I felt like they only existed in big AAA games but it was hard to find it for smaller developers with fewer resources. I made this pack to provide a bigger set of tracks for all moments in a game, both the intense combat moments but also the more emotional tracks.

The pack came together quickly to be honest. I gave myself a challenge to complete one track per week and soon I had it all together. In the end, I had a music pack I was proud of and hopefully a great resource for all the game devs out there!