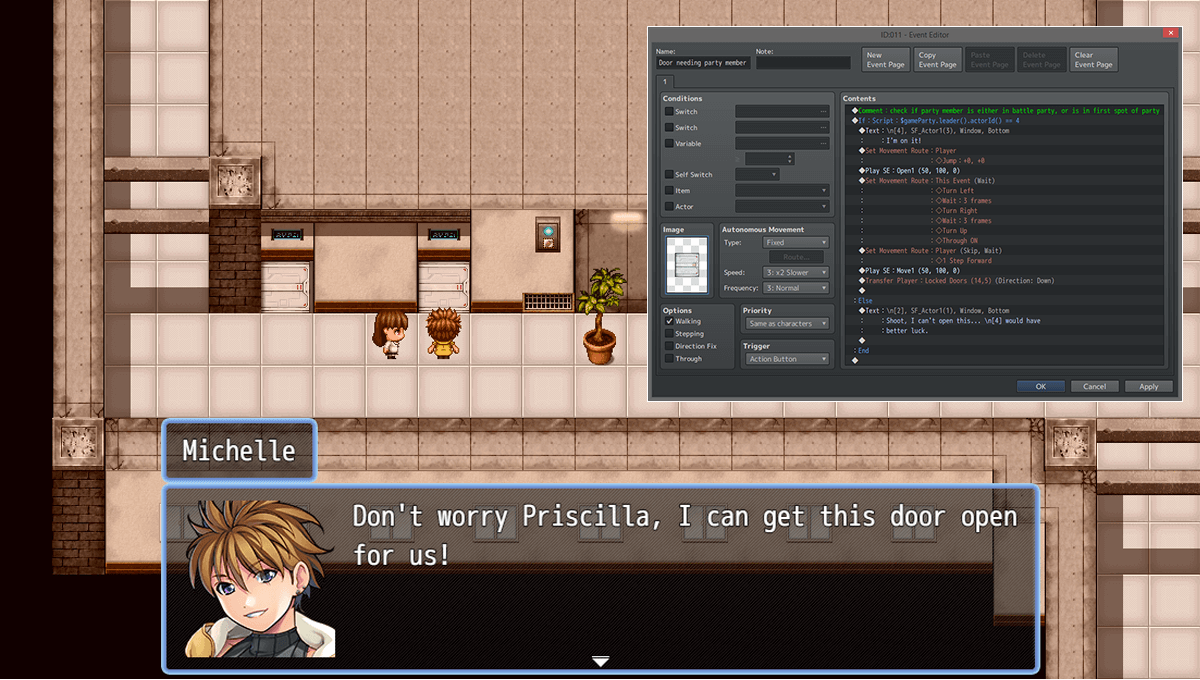 Locked Doors and How to Open Them

Locked doors show up in almost every game. Whether the doors are shut through magical means, a password, or even a simple deadbolt, chances are the heroes will need to figure out a way to unlock the door to move forward. Since having to open locked doors is so common, let’s learn the basics we need to add our own doors to our games.

Many locked door events share a similar basic setup. The event has two pages, the first one where the door is locked and the second page where it isn’t. The second page relies on the page’s Conditions to keep the door locked until we want the player to open it. So once the player’s beaten a certain boss or has found the right item, the door’s event will use page 2 and let the player move forward with the game.

For the door’s Move Route on page 2, we can make our own for every event that needs it, but an easier way is to use the Quick Event Creation option when we right-click on the map and use that event as the base for our locked door’s page 2.

Having all the doors open in the same way (such as the next door unlocking after a fight) works fine for many games, but let’s take a look at a few different ways we can set door events up to keep them interesting.

Using Items to Unlock a Door

One way to unlock a door is pretty obvious: using a key! We can do that by making a key item in the Database that our players can find at some point while playing.

Since it’s an item we can give it to the player in a bunch of different possible ways, from having it as a Drop Item for a boss Enemy to needing to buy it from a shopkeeper to even just having it tucked away in a treasure chest.

Once we’ve chosen a way for our players to get the key, we need to set up our door’s event. Which is as simple as setting up our event with page 2’s Conditions set to that item. As long as the player has the key item they can go through the door.

That’s not the only way we can use items to unlock doors though. If we include a lot of doors locked with keys, then our players will end up needing to keep a ton of keys in their inventory so they can get through all the doors. Which can work, but not all games need to end with our players carrying twenty keys around with them.

Another option when using items is to let the player use the key to permanently unlock the door and then remove the now-unneeded key from the inventory. On page 1 of our locked door we can use a Conditional Branch to check if the player has the key item. If they don’t have the item then a message plays about the door being locked and needing a key, but if the player does have the item then we can use Show Choices to let the player decide if they want to use the item or not. If they decide to use the key, then we’ll remove the key from their inventory and turn on the event’s Self Switch A.

Self Switch A is our condition for page 2 to run, which lets our player go through the door. And since we’re using a self switch to control this event, we know the door will stay unlocked even though the player doesn’t have the item anymore so our players don’t need to carry around a lot of unnecessary keys throughout the game.

Items aren’t the only thing we can use as a condition though, so next let’s take a look at using actors.

Using a Party Member as an Event Condition

Having an actor act as the ‘key’ to unlocking a door can be a great way to keep our players from rushing into a dangerous area way too early. One way to do it is similar to using items, by setting the Conditions of the door’s second page to require a certain actor. This way, as long as that actor is in the party the player can get through the door.

But what if we want doors to only open if that needed actor is the leader of the party? It’s doable, but we’ll need to use the Script Call ‘ $gameParty.leader().actorId() == # ‘ to get it to work. We just need to replace the # with the number for the actor (found in the Database) that we want to be the party’s leader when the door is unlocked.

Our event uses a Conditional Branch to check if the right actor is leading the party. In the case of this example, we need Michelle (actor 4 in the Database) to be the party’s leader. When she is the leader, the door opens and the player walks through it.

This example only uses one page, since Michelle needs to be the leader each time the player wants to go through the door. If we wanted the leader to unlock the door and keep it unlocked, then we can use a self switch and second page much like we did with the item event example.

Switches are a straightforward way to unlock doors. When we turn on the switch connected to the door’s event Conditions, then our players can use the door. But since we’ve already looked at how to set up locked door events, let’s think about a different way to use locked doors and switches.

Since switches aren’t tied to a single event like a self switch is, we can have one switch unlock (or lock) more than one door at a time. That means we can do things like making a puzzle where the player needs to hit multiple switches to get through the map!

Setting it up requires three main events that we can copy and paste around the map once we’ve made them. The first one is the switch itself, which is where the player can turn the switch on with page 1 or off with page 2. Since we’re already using a switch for this, we can set page 2’s condition to that switch so we don’t need to keep track of any other switches or self switches. To make sure the player knows that they did hit the button, a simple Move Route for the event plays a SE and turns the event in place so that button is pushed.

The other two events are the locked doors themselves. In this example we’re using lasers, but the same concept works for any type of doors or blocked paths. Door 1’s event has two pages, the first page having the lasers on so the player can’t get passed and the second page (which has its condition set to the switch) has the lasers off and is set to ‘Through’ in the page’s Options so that the player can pass through the event.

Once we’ve got those three events set up, we can copy-paste them a few times around the map to make the locked door puzzle we want!

These are just a few ways to create locked door events for our games. Figuring out new ways to unlock doors can be fun for our players, so why not give some of these ideas a try? What other ways can you think of to make unlocking doors interesting in your games?