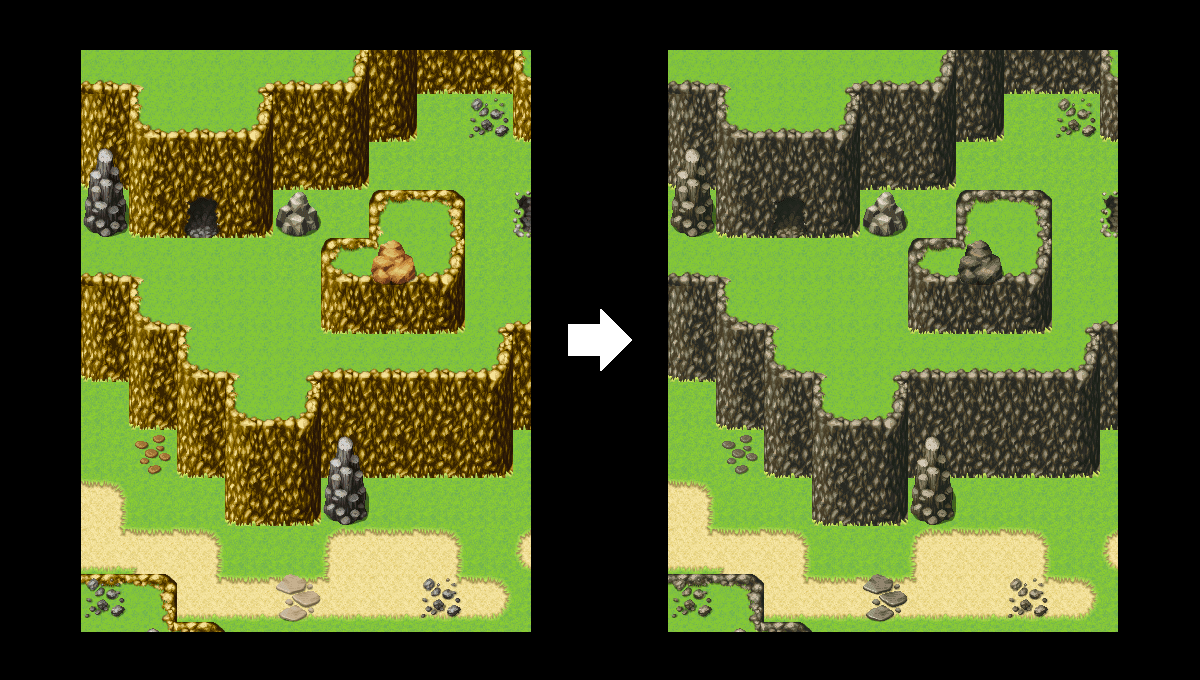 We've talked about trying to use rocks of similar shades in the same area if possible before (this is not super strict, but just look at mountainsides and you’ll see that in most cases there is one main type of stone), but what do we do if we don’t have much variation in one shade available? Well, we make it ourselves, of course!

This tutorial is made with Gimp and default tiles, some of the techniques used are very similar to the FSM and RTP tutorial I made before.

To start, create a Gimp file where you will collect all the tiles you want to bring to one shade, here I picked rocks from all over the MZ RTP. Since I will copy them back to their (in this case) A4 and B/C/D.. places later, the size of this document does not matter, though I kept the 48*48 grid to make it easier to put them in their old places.

I don't have to check the color count, as they are all from the same, indexed set.

Now you have to split this layer into two: The one with stuff that you want to affect, and one that has to stay as it is. What do I mean:

The grass shall still be green in the end, and the shadows of the rocks all black. That means you use the color select tool with a low range and carefully add just those areas, then crop that area and make it a new layer.

This is what your resulting layers could look like:

The one with the fixed parts can be turned off for the entire process, as they should not be affected anyways.

Now create a new empty all white layer and edit its layer attribute like this:

Set the mode to “Saturation”. This will have all layers below (as our all rock layer) have the same saturation as the while layer… none.

This way you can fix the contrast of each stone without even caring about the color part of the edit.

Before you fix the contrast, you have to pick your “go to” rocks first, in my case I picked this one here:

Now select one of your rocks (or multiple, if they have a very similar contrast) and use the Curve tool to adjust its color.

This is a very intuitive process that can take a little time to get yourself into, but once you get a feeling for it it is very easy.

Repeat this, until all your stones have a similar contrast. Your main indicators are the lightest and the darkest color you are aiming for, make sure these are in the same range as the “original”. It does not have to be absolutely perfect in the end, some variation can be nice and create some variety on the map, just make sure they are at least similar.

Since the tone picked on the start was not all grey we cannot leave it like that, and by turning off the Contrast Check layer we see what we have to fix next: the actual color.

For Photoshop this is easier, but with Gimp it's still pretty easy if you know how. And of course we do.

Copy the stone you use as an example into its own layer and then go to Color->Map->Sample Colorise.

This will make your life a lot easier, I promise:

You get this dialog, where you use the layer with all the stones as destination and the layer with the single stone as example. As they already all have the same contrast, which you fixed before, you don’t even have to touch any handles, just click “get sample colors” and then “apply”.

Combined with the fixed layer we separated before, we get this result. If you think some of them are not right yet, undo the color map, go back to the contrast part and adjust those tiles again before repeating the color map step.

Copy your results into their respective layers and you can map as you like.

After all that talking we should have a look at the difference this makes, right?

The pro is: all your stones look the same, the con is the same. Make sure to not overuse this on too many things, your maps could look boring if you overdo it.

You can also use this technique on other things such as:

Another important area of use is when you want to make a new custom edit and try to combine parts from two different objects that have a similar color into one.

Let’s say we have this handrail:

and we want to combine that with this pillar, as they are both main elements in the same temple or palace:

Now all we have to do is to edit in the piece we want to have:

And then do the same thing as we did above, first fix the contrast with the Contrast Check layer on top (I want the pillar color to be the resulting one):

And then use the tone mapping on the handrail layer:

Some further things to keep in mind:

While this fixes color differences, structure differences remain. Not every rock goes with every other rock and so on.

Have fun with this (maybe new to you?) feature!