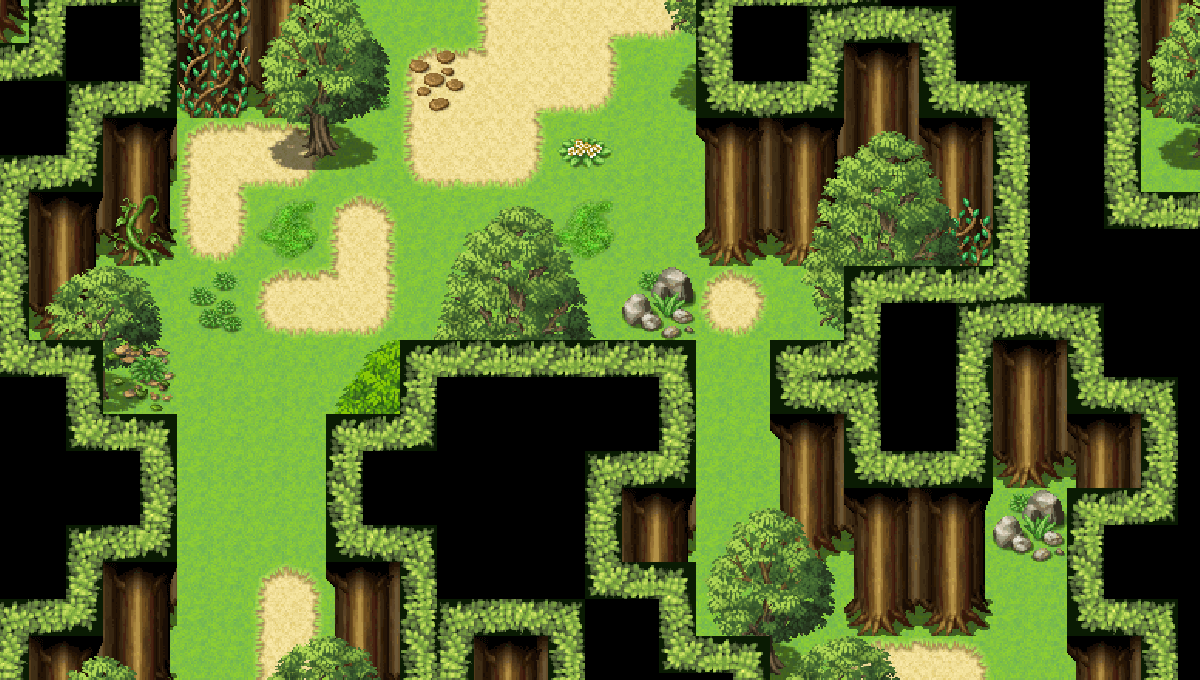 Avery has taught us how to map deserts and towns, now it's time to take a look at mapping forests!

No matter when, no matter where your game is set, you'll probably be mapping a forest at some point.

First we have to ask ourselves: how big is our map going to be.

+ People will have a better sense of where they are
+ the seamless map makes it feel more like one large forest
- depending on the size and amount of events, it is possible that it can cause lag, especially if you players have old PCs and your maps are giant (this is much less likely with MZ than with MV)
- it is much harder to keep everything consistent, especially if you have cliffs on the map as well

+ You can cut the map into easier to handle chunks
+ If your player can run the game, there is pretty much zero chance of lag.
+ You can use different tilesets for each map, if you have special locations in the forest
- a lot of map transitions can be annoying/confusing depending on the forest layout

For the tutorial the map is small so you can see what we are doing. ;3

If you make an editor made forest map, I would recommend using the forest autotile. Of course my starting point here is not that pretty yet, but it helps you to design your map a lot to get your basic shapes down first. Covering that area with trees would either look repetitive with the amount of trees we have in the default RTP or take hours to plant them all overlapping correctly after gathering enough different trees tiles from the community.

Also, you can structure your map the way you would structure a dungeon, at least layout wise.

Now add some ground variation. For this map, I wanted to have some paths, but as I don’t want the forest to look like there is a lot of traffic, the once made paths have been partly overgrown again, so we are left with some less artificially looking patches of ground.

To get away from the cave look and make it more a forest, I added some “holes” into what would be the cave ceiling and of course added the according “tree wall”.

Just with that step, the closed and dense dungeon-like map looks a lot more like an actual forest. In that step I also narrowed down the right path, as it felt too open for the map I had in mind.

To make the forest even more… foresty, add more trees. Make sure to have some overlapping each other and have some partially hidden behind the “forest walls”. In this case, I even blocked the right path off with trees as this section was still accessible “from the other side”, the area that is outside of frame. Make sure to avoid big clusters of the same trees, for example, I never clumped more than two of the large trees together and avoided clumping the smaller ones completely.

Of course this highly depends on your mapping style and whether the forest is planned or not, but to me these lined up trees always make a map look less natural.

Now, add some decoration. Make sure to have stuff that matches the season you want to have (Considering the amount of flowers for example) and to not overuse the things so the clutter is not too repetitive. Make sure to decorate the non accessible parts as well to keep the map consistent and pretty. Remember that you can also use just the upper half of the vine tiles, that way you get more variety on your map by having some be 1 and some 2 tile high.

No matter how pretty your forest is and how well you made the map, make sure to get your players some eye candy and stuff to explore. In my case, I added a small logging camp, sporting tents around a fireplace (if you hide most of the tent behind the forest wall, no one will notice that this is facing the same way as the other), some wood, tree stumps and a little pond, probably the reason they picked that place for their camp.

Your forest could have:

a nice little lake or a river
a camp
a hunter’s cabin
some ruins
a temple
a hidden small dungeon
… and many more things!

You don’t need to have these things, just keep in mind that some extra eye candy and stuff to explore can help the player stay motivated!

Until here, we used only the default set, but to be honest, only two default trees and the very blocky tree autotile are things you can improve.

And they already were improved by amazing people on the official forums. To show you how much you can improve your maps if you just take a little extra time to visit the board's MZ resource section and add some of these tiles to your set, I swapped these two things for alternate tiles made by slimmmeiske2.

Tree autotile: Because of the different shape, I removed the auto shadow on my map when I swapped it in. I love how with just a few changes, slim made the trees look much less blocky and more organic!

Trees: There are three different tree sizes in her set (by when this is written, maybe there is more on some day) and I just love how they look. They were a bit more work to swap, because of the different size, but they would be the same amount of work used in the first place. I also included the little clumpings she had on this set.

These few custom tiles already made a huge change. You don’t always have to build a brand new set, but sometimes just a few swaps can turn a decent map into a very good one (of course, this is up to everyone’s own judgement ;3).

A hearty gobble gobble to all our fans from the US having Thanksgiving, and a hearty "THREE NEW RESOURCE PACKS!" for everyone. It's another release day, let's see what is in store... for the store.

This week let’s focus on some gorgeous pixel icons and other resources made by Caz!