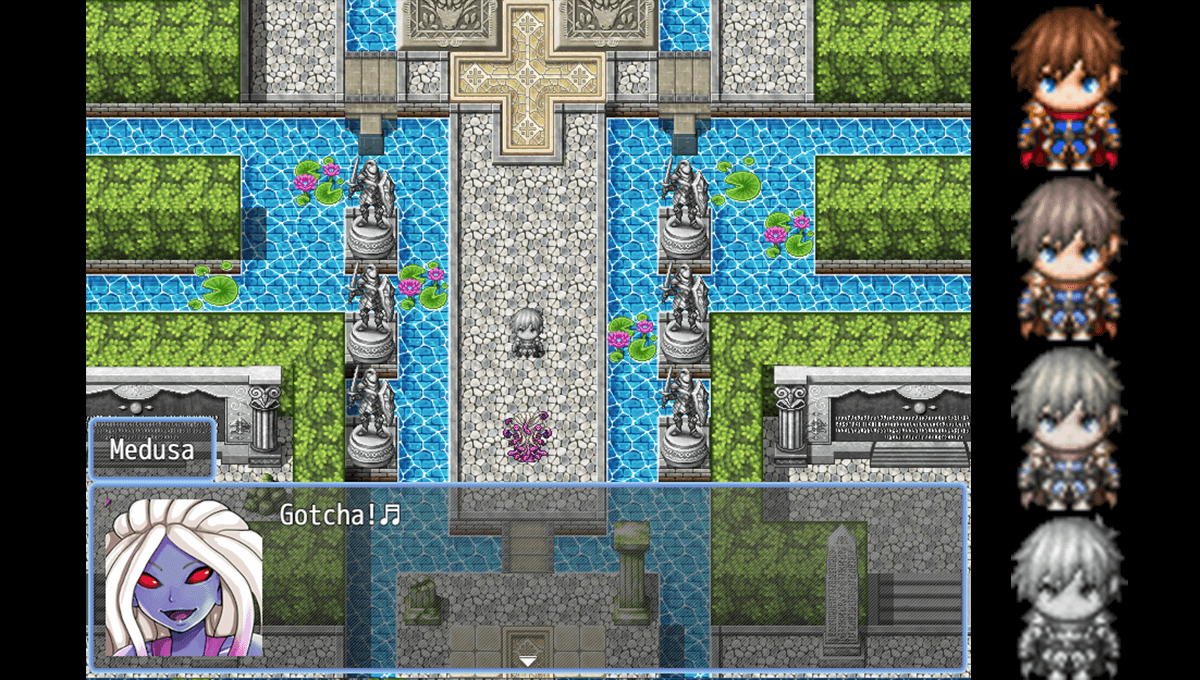 Whether an evil monster turned the player to stone or you want to honor certain characters by erecting statues in their name, there are many reasons to turn a standard character sprite into a statue tile.

The intuitive approach would be just turning off the saturation which might work as a quick and dirty way, but considering that this statue would be all from one type of stone the dark hair in contrast to the light skin does not make the slightest bit of sense.

To fix this, we can add an all white layer on top of our char that is set to “HSL Color”.

Now we can use the “Select by color” option to just select just one section, for example the skin or the hair, on the character layer and then use the curve to bring them all to a similar brightness and contrast:

This is a very intuitive process and it is totally up to you which one of the colors is your “reference”. For example, here I felt like Reid's clothing was pretty consistent already, so I brought the skin and hair to that level, as well as the white from his clothes and eyes.

Here you can see what difference these small adjustments make.

Now we have a perfect base that with a few more edits will be a beautiful statue.

Whether we want Reid's statue to have a base or not, this setup will help us a lot by figuring out if we nailed the statue look by having a reference right at the same sheet, especially with the base just below Reid's feet. You can find both the base and the statue on the default set and can simply cut them into one sheet for this purpose.

The first step would be to use the curves or another of the color tools to adjust Reid to match the brightness and saturation of our reference:

But as you can see, the result is still off. This is due to two things:

For both we will use the same technique, and worry not, this is something you can easily replicate on any other character.

First a little (not complete or in depth) explanation on the layer mode “soft light”.

and add a second layer with a random grayscale image on top of that, maybe one like this

which is set to the layer mode “soft light”, this will happen

Everything white on the soft light layer will brighten up the layer below it, and the black will darken it. A neutral gray just in the middle will do nothing to the image below.

Why is that so important?

This will help us with both the structure and the shading and allows us to add both in an easy non-destructive way AND allows us to switch out the character we use them on. So we can set up a structure and a basic shading layer and apply them to any prepared character.

This is probably one of the easiest edits you ever made!

Look, we create a new layer which is all neutral gray, which means it has a Saturation of 0 and a Brightness of 50.

This filter will apply noise to the layer, just in the amount we want it to be. You can play around with the sliders a little, in the end you want something that is visible, but not too intense so it doesn’t scramble up your character.

The layer you saw in my example led to this result (right). The difference is not too huge, but this tiny addition of structure helps a lot in helping this character to pass as a tile.

If we now compare our Reid statue with the angel we can still see a difference: the angle as a clear light source on the upper left, which Reid still lacks, making him look a little flat and off.

Which means we need a second “neutral gray” layer which we will use for a simple “dodge and burn”. That means we take our base

and add a neutral gray layer on top of it, on which we draw in darker and brighter spots where we want the light and shadows to be!

This is how for example a working layer for Reid looks like without “soft light”:

And here with soft light and merged with the base layer:

Now we can either add a shadow on the ground or the base, and here we go!

As a little bonus, maybe you want Reid to petrify on screen, for example, after medusa looked him in the eyes.

Therefore we need a charset that has just the pose we want to “freeze”.

Now we can export this sheet and use a change player graphic and turn movement to have Reid turn to stone for us!