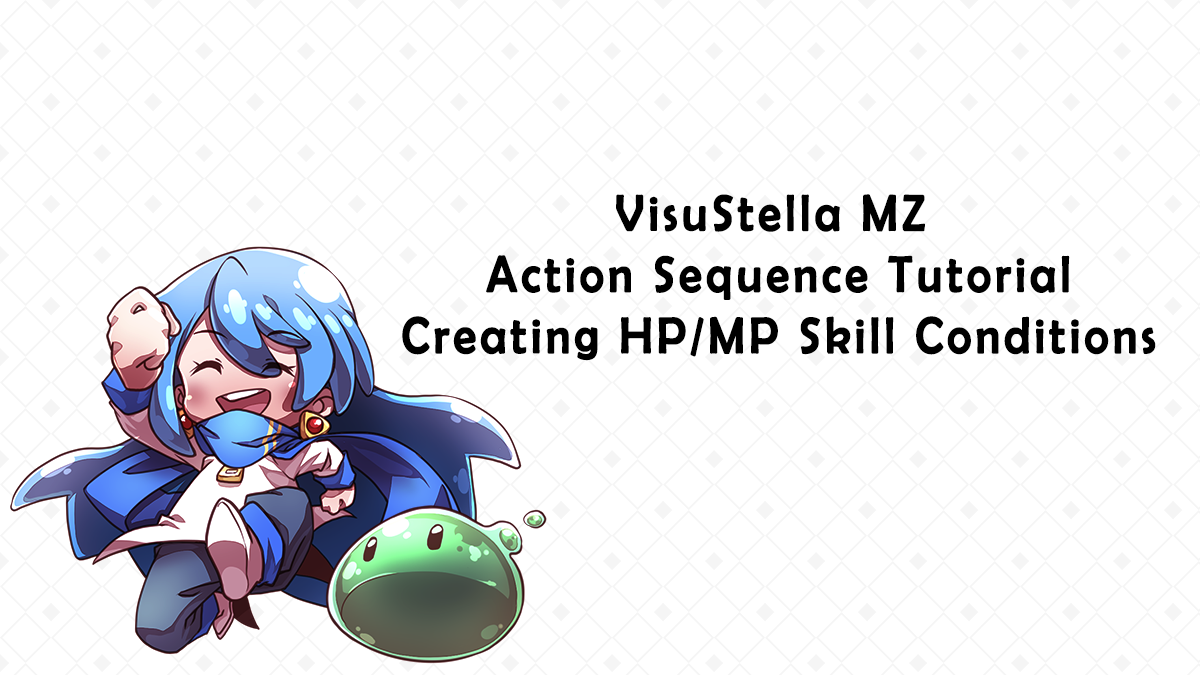 Continuing on from our last exercise, today we will be doing more work with Visustella Battle Core and Action Sequences, focusing squarely on creating skill mechanics, rather than fancy graphical movements that you might assume are all Action Sequences are for.

Today, we will be focusing on creating skill effects using an actor's health and skill resources as triggers to perform additional effects. Namely, HP and MP. TP can also be used, but we won't be using it for this exercise.

Our goals today will be two-fold:

Now that we have our goals set, let's get down to business! First, we'll tackle the HP skill.

For this, we'll make use of our already existing Flame Aura skill. Do you remember how we made that skill an action sequence despite it not doing anything out of the norm? Well, now we're going to be doing just that!

Head over to the Common Event tab, and open up Flame Aura's Action Sequence.

Next, we'll open up a variable event command and create two new variables. For these ones, let's create variables we can continue to reuse as we need them. For our purposes, we'll call them 'Skill Condition 1' and 'Skill Condition 2'

Next, we'll select Skill Condition 1 and set its value to be that of Reid's Current HP and confirm it.

After that, let's open up another variable command, and this time, let's set Skill Condition 2 to the value of Reid's Max HP and confirm it.

Now that we have our variables in order, it's time to do some simple calculation! First, let's use another variable command with Skill Condition 2, and divide it by 2 to get 50% of Reid's Max HP.

Once we have our variables and operations in order, let's add in that extra effect! For this exercise, let's say that when Reid's HP is at or below 50%, Flame Aura will restore 25% HP to him on top of its state granting effect!

We'll use an HP/MP/TP Action Sequence command targeted at the user like so:

With this, our skill modification is finished! Let's test it out...

There we go. It restores HP in this case, since the condition was met! Perfect.
With this, our HP Condition exercise is finished.

Now, let's move on to our second exercise. This time, we'll start with a new skill.

Let's name it 'Gale Blade'. After all, what aspiring hero doesn't have a sword skill or two to show off, right? Make sure everything is in order, especially your <Custom Action Sequence> note tag!

As you can see from the description, our effect this time focuses on MP. When Reid's MP is above 75%, this skill will proc 2 extra times for 3 hits total. Sounds pretty useful, doesn't it?

Well, let's give it a whirl! Off to the Common Events tab!

You know the drill by now, I hope. Set up a new Action Sequence, and name it 'Gale Blade'. We can give it all the usual setup, animation, and effect commands.

After we finish that, let's head back over to Flame Aura, and copy our variable operations from there. Why spend time reinventing the wheel when you can just copy, paste, and edit, right?

Paste the event block into Gale Blade after Action Effect, since that's where we'll have our extra effects process.

Now it's time to edit these operations so that they calculate whether MP is greater than 75%, rather than below 50%.

Now that this is done, let's add in those extra effects! For the sake of balance, we'll lower the damage of those two extra hits by using a Multipliers Action Sequence command. Let's make the 2 extra hits 30% of the original skill's damage.

With that, we'll add two action effect commands, and our Common Event should now look like this:

Looks like we're done! Let's go back to our skill and add the Gale Blade Common Event to the trait list. Never forget that part! Once that's out of the way, we can finally give our skill a test run!

That's all for now. Till next time!