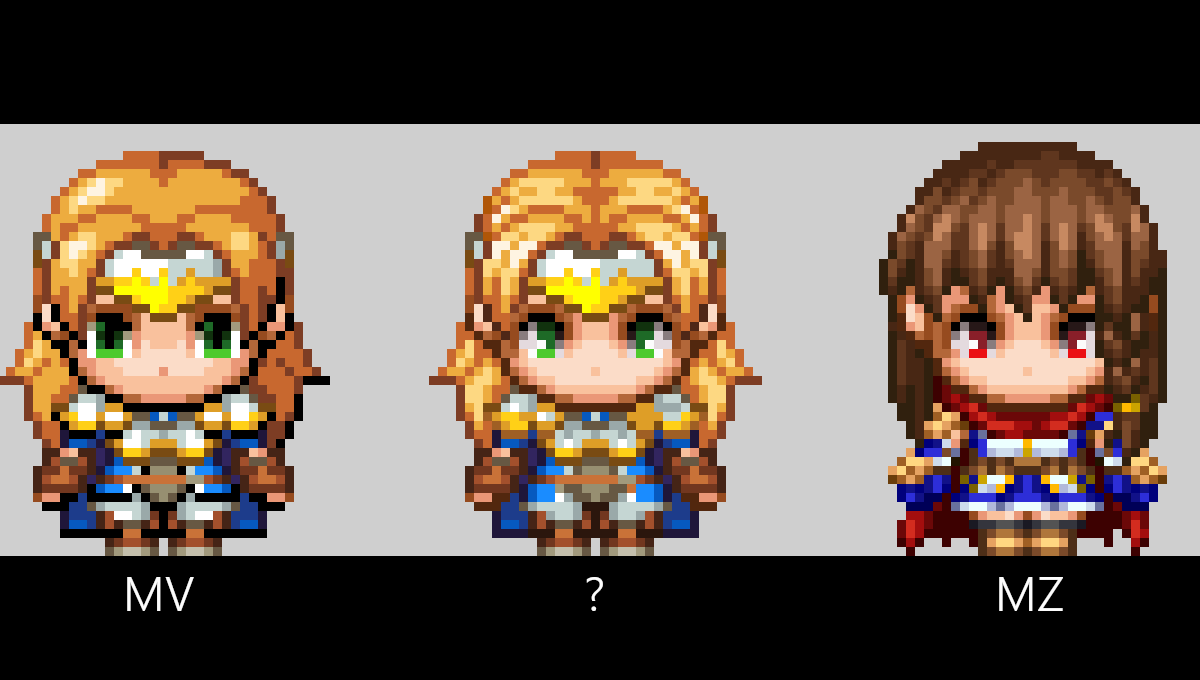 At first glance, MV And MZ’s character sets look pretty similar, but for the new engine, the style got an update. This is good on one hand, as they are improved and blend in better with the tiles, but it might be an issue if you want to use sprites of both engines along with each other. So let's look at how to update an MV character to MZ's style!

I will use Actor 1_2 as an example, on the left we have MV and MZ on the right.

Now, let's have a closer look at all the differences one after another and step by step move through the process to have the MV heroine match the MZ one stylewise.

The first difference is the most obvious, we can see it at first look:

And to switch them you have two main options: copy, paste and recolor the eyes of an MZ sprite or just manually rearrange the pixels with the MZ version on the side, both give you a quick and nice result:

To proceed with the makeover, let’s have a look at the remaining style differences:

If we compare the faces, we see a slight different shadow around the chin and a lighter tone for the nose, which is not crucial but we can quickly change it along with the other important thing:

The MV style has a black line at the bottom of every piece, while MZ only sports black for the eyes and very dark shades. Plus, MZ’s style is much less outline focused, look at the white rim of the skirt, there is no outline around that.

To adjust that, first replace all black skin outlines with the dark brown shade and mimic the MZ face - here copy and paste can speed up the process.

Then you look at the other outlines and carefully either replace them with a dark shade - on the outside - or try to remove them if possible.

If we compare the front hair, we will find that MZ’s hair is much more detailed and refined. We will also find that the light seems to come straight from the top rather than from the top left like it was done in MV.

Left is the original, with the very flat shading. We remove those highlights, and draw in he new strains. That process is more difficult to see on the front, so, let us have a closer look at her back.

First we remove nearly all of the previous shading by filling all of the highlights with our second darkest color.

On top of that we create a new layer and use the next brighter color to draw in all the different strains of hair. Since this is mostly symmetrical, we can do it for only one half if we want.

Then we use the next brighter color to draw in highlights, we usually have a circular highlight on top of the head and for long hair one in the lower part.

After that, we can mirror those highlights and make sure that the highlights on the left are a little more prominent than on the right. And for this frame, we are done!

This is how our sprite looks like, as of now:

And in fact, we now have the tools to fill out every frame of this sheet, one by one, by repeating what we did so far!

Of course we need to make all the black outlines “not black” here as well. We can use our middle frame as guide:

As you can see I did not touch the hair yet, as I prefer to edit the moving frames out of the front to ensure they really match each other.

Therefore, we just copy the hair part onto a new layer and line it up with the frames

As you can see, all we have to do is a little moving and adjusting. We can see what is still left to do by toggling this layer on and off after each edit until everything lines up as we need it.

And just like that, the first row is functional!

Since here we also have the middle frame done, we repeat the same steps as for the front, we fix the outline…

…and then we copy the hair onto a layer on top and edit it to align:

Another row that we can tick off!

And if you did not already guess it, the side will be made just the same way!

But, for example for this character, we are lucky: If the design is symmetrical, we can save a lot of time, as then the sprites for both sides are identical.

The outline fixing at this point is just a few clicks and done.

Now a huge benefit is that we already have the front and back done, so for the side view hair, we can use them both as a reference so the style and shading lines up with them.

And now again, we take the hair from the standing pose and edit it onto the two walking frames:

And now all we have to do is to assemble the sheet:

And a final Q&A with some further details on this topic:

Are there further differences between the two styles?

Yes. You could even go further and add additional shading to the clothes when converting from MV to MZ, but those areas are usually so small that it does not make a huge visible difference, that is why I would usually leave this out. Another thing I usually leave out when doing such a conversion are the minor built differences, as you can see here on the female bases as comparison:

You can see that there are very few offsets. With clothes applied, most of those differences are already not visible anymore plus it leads to some variation in body shapes, which I think is not bad either.

Making those adjustments with the clothing on is very fiddly and not intuitive as well, so if you are okay with those slight differences, ignore them ;3

Does this apply to animals and monsters as well?

The biggest difference for animals are the black outlines, which you should want to get rid of if you want to use MV animals and monsters in MZ. Since most of the animals and monsters out there are fan made you have a huge variety on how the fur is designed plus the four default animals of MV and MZ have a very similar shading style, the shading barely would need to be touched at all.

Does this apply to SV Battlers as well?

For SV battlers I would also try to go through the whole sheet part by part instead frame by frame, e.g. fixing the hair on a separate layer for one and then copy it to all poses which have the same hair position and then edit it onto the next frame and copy it onto all frames with the same hair position and so on. This will help you to save editing work and ensure the shading is consistent. Be aware that this whole process will always take quite some time. It is not extremely difficult, just very time consuming!