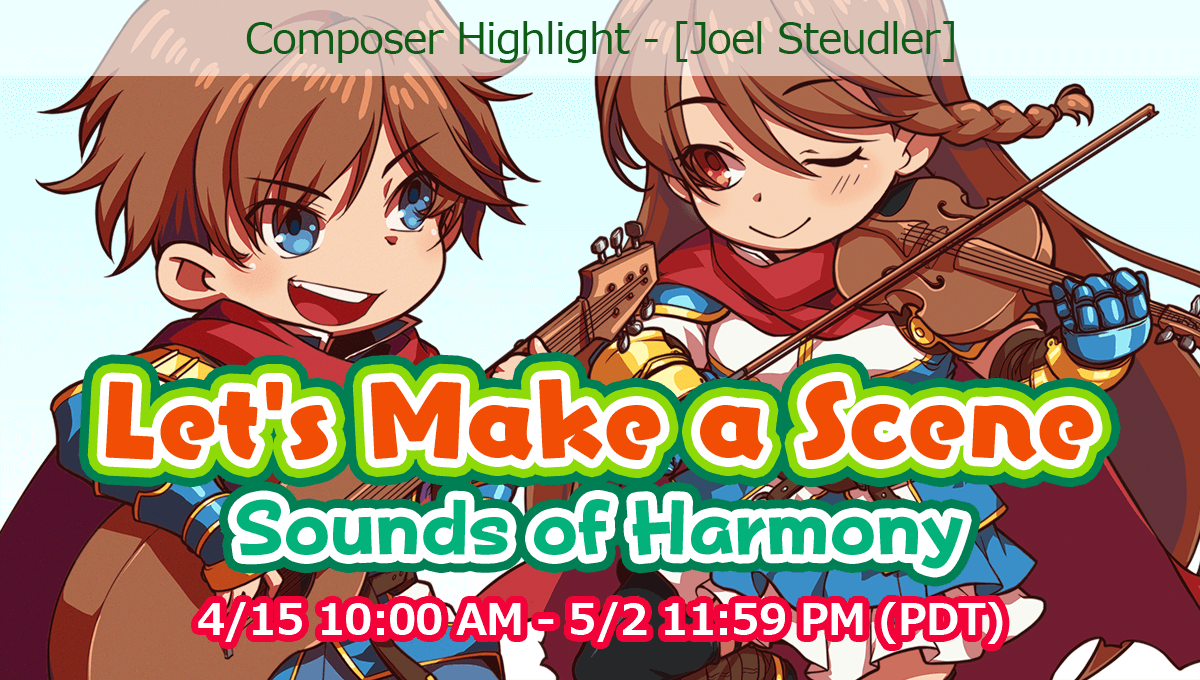 Our Let's Make a Scene: Sounds of Harmony contest is live, and we're sure all of you are busy building your fantastic cutscenes, so let's take a closer look at one of the composers who contributed to the music you are selecting from!

Joel Steudler is one of the longest running RPG Maker music pack composers around, and he has made a staggering number of amazing music packs to bring your games to life. We took the time to catch up to him about the track he added to the contest and the pack it comes from.

Hi Joel, why don't you tell us a little about yourself?

I'm just a simple man trying to make my way in the universe. Or, at least, trying to make stuff in the universe. Universal stuff, like music and art. Everyone likes those, right? I've spent a few decades making this and that. Composing music has turned out to be my preferred method for extracting ideas from my head. If I didn't do it, all that pressure would build up and the result... it wouldn't be pretty. Not that I'm pretty now, but I'm pretty sure that it'd make things worse. So I should probably keep making art and music. After a nap.

‍You've selected Opening the Portal from the Cursed Kingdoms Music Pack for your track for the contest, can you tell us a little bit about it?

The Cursed Kingdoms setting was co-developed by me and several other creators. One of the first conceptual elements that emerged was against portal between dimensions which, well... be really careful if you open those. Like, try to research what you're doing or you might end up meeting some unexpected guests. Based on a brief description, Dragoonwys (who made the Cursed Kingdoms tileset) came up with the look for the portal and I later 3Dmodeled it in greater detail for the battleback.

I wanted to capture the otherworldly, eerie anticipation of the unknown with the track 'Opening The Portal.' I tried to convey the seasick, breathless realization that maybe it was not such a good idea to trifle with these forces, but once things are in motion, there's no going back. And then, you must deal with what comes through. It's much more sound design than music, which is unlike the rest of the pack, but there is a passage of dark choral beauty as the process nears its completion and... well, it's up to you what breaks loose!

‍Can you tell us a little more about the Cursed Kingdoms Music Pack as a whole?

On the whole, our Cursed Kingdoms setting is a delve into dark fantasy. I wanted the music for it to sound wild, untamed, and dangerous, but beautiful and exhilarating too. To capture a sense of raw energy and unrefined emotions, I turned to traditional ethnic instruments from eastern Europe and the Balkans. Those were wonderful for melodic explorations and moody texture, but to really amp up the anxiety I added powerful distorted metal guitar to the mix. Avant-garde cello and violin performances round out the ensemble. The message of the music is "you probably shouldn't be here, but if you're tough enough you might survive."

I've enjoyed revisiting and expanding the setting with the Twisted Forest and forthcoming Untold Tales packs... and hopefully more in the future. It's always inspirational to see GalefireRPG's mean monsters, Wys's tiles, and Dreams Circle's awesome animated effects that give shape to all the amorphous terrors of the Cursed Kingdoms!

Other Music Packs From Joel Steudler

Other Pack from Joel Steudler