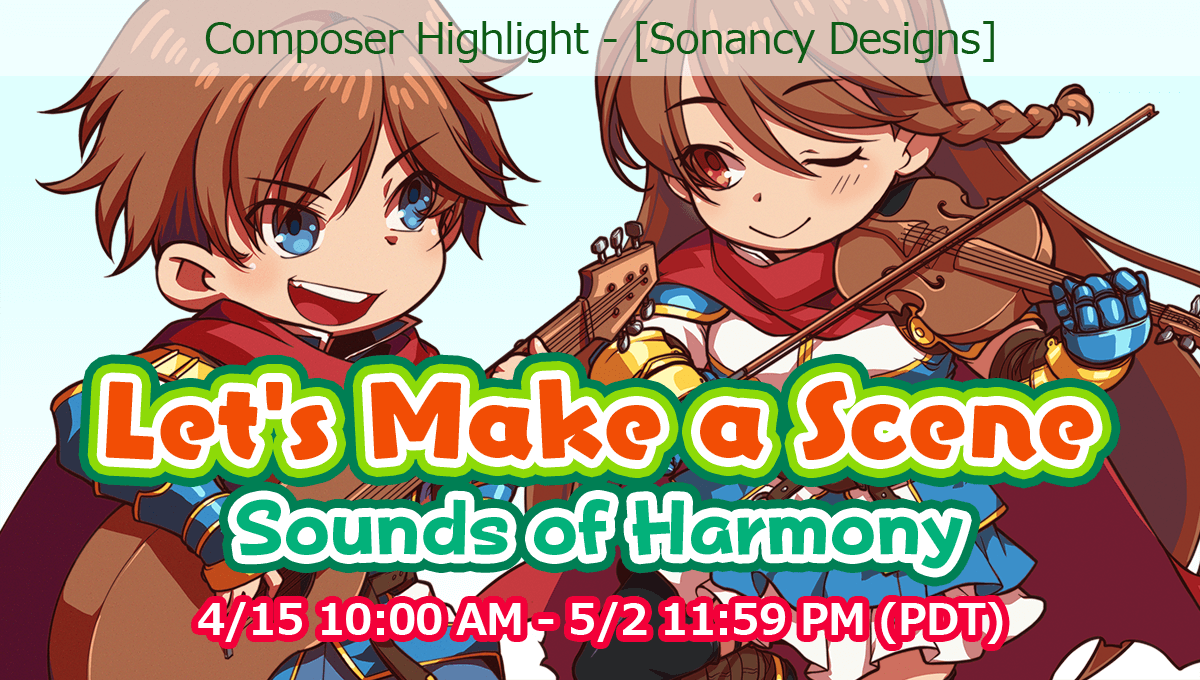 Monday we looked at one of the 5 composers who are participating in the Let's Make a Scene: Sounds of Harmony contest. Now, let's look at our second with Sonancy Designs!

If you are looking for some music for your game, you should definitely be looking at the packs from Sonancy Designs. Alec of Sonancy Designs has sent us a track to use in the Let's Make a Scene: Sounds of Harmony contest so we reached out to learn a little bit about him and the track he selected.

Hi Alec, it's always great to learn a bit about the people behind the materials we use, so first up, tell us a bit about yourself?

My name is Alec Shea, I’m an Australian game and animation composer and audio designer based in Tokyo.

I’ve been working freelance in game and animation audio for 5+ years doing everything from game soundtracks to sound effect design, dialogue editing, voice acting, and heaps of other things.

I’m particularly drawn to working on visual novels, JRPGs and other Japanese/Japanese-styled projects and have been lucky enough to work soon some amazing ones like Corpse Factory, How To Date A Magical Girl, Kanji Combat, Yandere Simulator and a bunch of other cool things.

But I’ve also had the opportunity to branch out and explore other musical styles in more western projects like the animated series Akedo and the Microsoft and Illumination Studios collaboration Minions In Minecraft.

‍You've selected A Battle Awaits from the JRPG and Fantasy Music Vol. 1 for your track for the contest, can you tell us a little bit about it?

I chose the track because I wanted to give the contestants something to work with that was epic and heroic and had some great builds, but also had sections with tension and some more subdued sections so they could use these changes to build some kind of story. The main thing that really drives the track is the heavy percussive drums, so I’d also love to see if anyone uses the timing of the hits with scene timings in some interesting way.

‍Can you tell us a little more about the JRPG and Fantasy Music Vol. 1 as a whole?

JRPG and Fantasy Music Vol 1 is a full suite of tracks for games full of epic quests and fantasy adventures. My goal with the pack was to give anyone who buys it a range of tracks that can tell a story.

No one pack can have a track suitable for every single situation that could possibly arise in a game, but I wanted to make a pack that if someone bought it to use in their game, then they’d have enough to work with to tell a story in their game through the music, just as much as through all the other aspects of the game.

Other Music Packs from Sonancy Designs