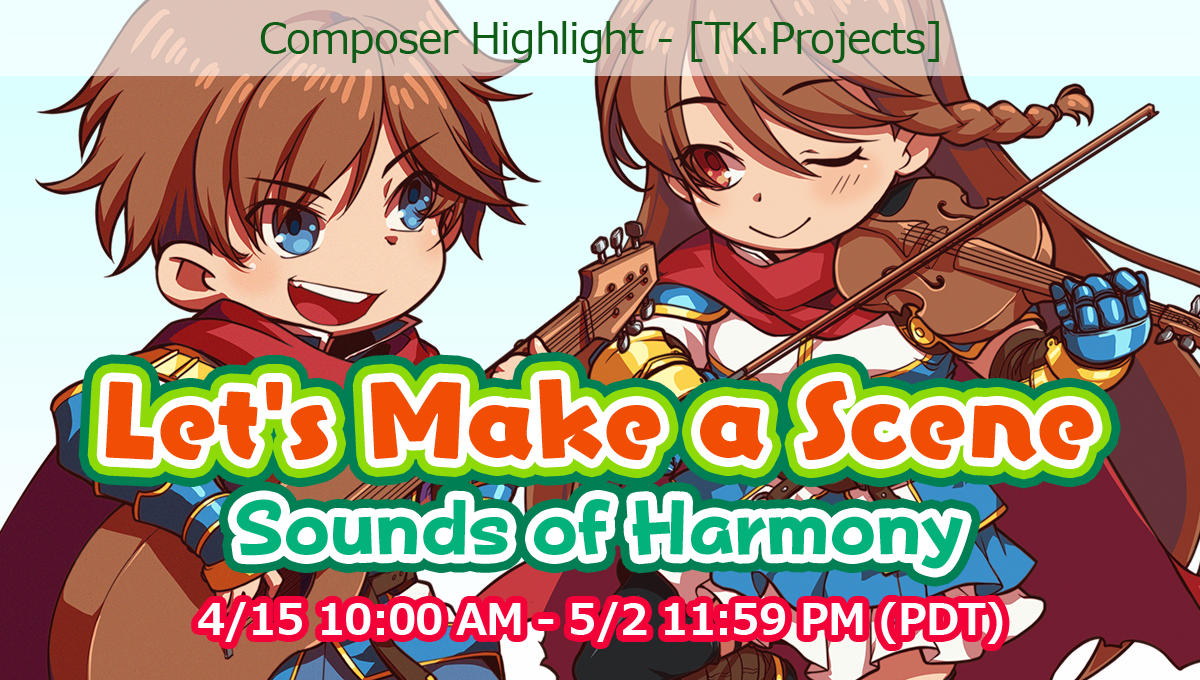 For the final track highlight for the Let's Make a Scene: Sounds of Harmony contest, we took the time to talk to TK.Projects, and the composer Noak about their contribution to the contrest tracks.

Note: This interview was originally conducted in Japanese and translated to English.

Well, first off, what IS TK.Projects?

We plan, produce, and sell background music and sound effects that can be used in the RPG Maker series.

We have worked with unique artists to produce about 50 titles so far that are “Classic Fantasy”, “Near Future sound”, “Symphonic”, “Retro Nostalgic 8bit” and other titles specialized in RPGs, as well as light novel titles such as “Horror”, “School theme” and “Character Voice SE”.

These titles can be used in commercial or non-commercial, video production such as commercials and Youtube, as well as live streaming and announcement PV, etc.

‍You've selected DFRM1_BGM09_Field_Town from the Dramatic Fantasy RPG Music Vol.1 for your track for the contest, what can you tell us about that track?

Composer - Noak: “DFRM1_BGM09_Field_Town” was created with the image of a lively port town. You can visualize the parties that have just got off the ship and patrons enjoying shopping and sightseeing.

‍So the Dramatic Fantasy RPG Music Vol.1 pact that it comes from. What were your inspirations for it?

Composer - Noak: “Dramatic Fantasy RPG Music Vol.1” which includes this song, is the second collection of music I produced with TK.Projects.

Before its production, we first discussed the contents of the pack.

At that time, the words “fantasy” and “cute” came out, and I decided to create these images mainly by soft sounds such as xylophones and wood pipes, and to create a pack that would be different from other packs. I listened to various game soundtracks, and I referred to the music from “Popolocrois” because it was very close to the image I had for the music I wanted to create. By showcasing the main instrument, I think I was able to create a sense of unity as a pack.

My intention of this pack was all about “write a good melody”, so it would bring me such joy and pleasure if people listen to it and remember it.

Other Music Packs From TK.Projects