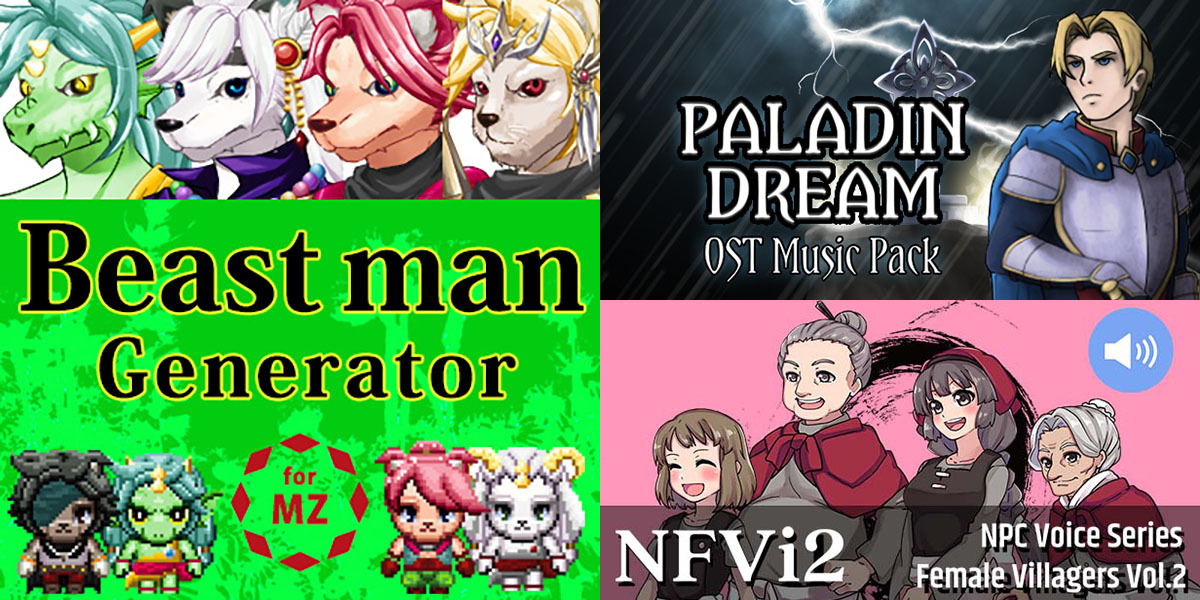 September is here and we have a beast of a release day for you! New generator parts for MZ, a new soundtrack, and more NPC voices are here!

The title of this pack already tells you everything about its content, but let's take a closer look! This is a conversion of the Beast man generator pack for MV, which was carefully ported and reworked to fit the different poses and style of MZ. With it you get the parts to create brave big cat based, terrifying wolf based and majestic dragon based male characters straight from the generator.

With all the different horns, ears and tails you can individualize them to your liking, maybe you want a canine with floppy ears and a bushy tail or a more lion based feline with a tail with a tuft of fur at the tip and round ears? This and a lot more is possible with this set, and due to the huge amount of additional clothes to dress your beast men up, this pack could also be interesting for people that don’t necessarily plan on even having beast characters in their game.

With four different head pieces, a whopping twenty different outfits and four front and rear hairs each, this is a gold mine for everyone who is looking just for some more variation on male character parts as well. From fabulous armors to fabric clothing there is a lot to get, and you can round the look of your characters up by adding the little crown or the dashing and delicate golden headpiece made out of chains on their heads.

For all of you looking to add some further variation to your male characters, here you go!

Have your heroes adventure into a paladin’s dreams with the Paladin Dream OST Music Pack! HitherYon Games has released their game’s music for other RPG Maker devs to use, with 24 tracks that can find a home in your own games.

Start a somber journey to the slow Explore, with low horns and a music box’s chimes ready to play in the background as your heroes prepare to leave their destroyed home town. Once they’ve regained their will to fight, have your heroes explore their world to the steady beat of Wilds, or take a break while the jaunty tunes of Tavern plays. When it’s time to face the final boss let Evil play, with its calm pianos ready to trick your heroes into thinking this foe isn’t anything special right before it shifts into a life-or-death duel. Grab one of the pack’s vocal tracks such as Chant3 or Hymn to add some extra oomph to a scene. Why have your heroes enter a possessed church to a normal song when you could make the moment stand out with drums and a mysterious woman singing? Or have your credits roll while a song about heroes plays.

Alongside BGM, this pack also includes shorter ME tracks like Defeat, Game Over, and Victory so you can replace the defaults like you’ve been meaning to. With multiple file formats this pack’s tracks are simple to add to your games, so you don’t need to worry about hearing the perfect track but not being able to add it to your preferred engine!

Give more of your townsfolk voices with NPC Female Villagers Vol.2! TK. Projects is back with another set of 12 character voices to help bring life to your towns and villages. Have cheerful girls yell hello as your heroes walk by, a sleepy young shopkeeper groan if you wake her up without buying anything, or an elderly woman gasp in fear when your heroes ask for advice about a magical book they stumbled upon in a dungeon.

With 10 different SEs for each character voice, you’re ready to add some more emotional reactions to your female NPCs as they wander their hometowns. If your heroes start the game when they’re young, fill their village’s small schoolhouse with the calls of young girls as they play and try to avoid doing classwork. Teach your players the basics of side quests by having them hear the high-pitched whine of a scaredy-cat classmate who needs them to rescue her favorite toy from the basement. Or skip the childhood chapter of your game entirely, and use the middle-aged and elderly female voices for shopkeepers and townsfolk to add some extra noise to your game’s villages so that it has human chatter in the background. This pack is ready to drop right into your favorite engine, so if you’ve been wanting to add some extra liveliness to your NPCs then check out NPC Female Villagers Vol.2!