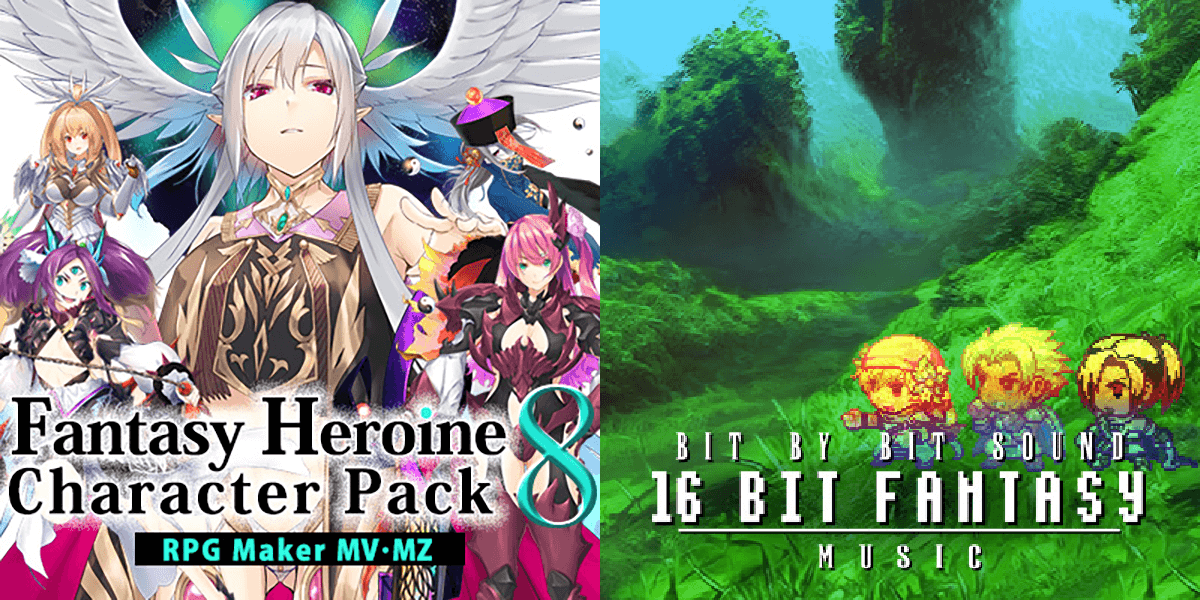 More characters, more music, it's time for another release day!

Find some new fun and fabulous characters for your game in Fantasy Heroine Character Pack 8! Gee-kun-soft is back with another pack stuffed with character content. With 16 characters to choose from, ranging from a young lady knight and a flower shop-owning elf to a spunky twin-tailed grim reaper and powerful winged valkyrie, you’re sure to find a new character whose backstory writes itself for your game!

Each character has a sprite, a faceset with 8 emotions, front view enemy battlers, bust images, and a SV battler, giving you everything you need to form a story for your newest party member (or villain)! Find helpful allies in the armored solemn assassin, pink-haired berserker, staff-wielding monk, and brunette defender, or fill your towns with NPCs who can do more than just sell items, such as the young dark elf, careless elf doctor, and the cheerful maid who seems to have an unusual knowledge of ice magic.

If you’ve been seeking some more mythological heroines, then this pack has you covered! Have an onyx-armored demon woman strike your heroes with dark magic, or turn a normal battle into a puzzle when a jiangshi hops into the battle and refuses to stay dead! Have the pink-haired grim reaper face off against an almighty goddess, joined by a mace-wielding 3-eyed fighter and an upgraded catgirl: a tiger girl! As a bonus, this pack also includes high-res images of the full body battlers, meaning you can turn them into larger busts or scale them to better fit your game’s resolution. Create memorable NPCs, dangerous foes, and adorably powerful allies with Fantasy Heroine Character Pack 8!

Find that perfect retro-inspired track you’ve been searching for in Bit by Bit Sound - 16 Bit Fantasy Music! Bert Cole has created 9 stunning BGMs for you to use in relaxed towns, moving cutscenes, and creepy dungeons. With inspiration that seems to come from our beloved childhood RPGs and a mastery of synth instruments, this pack is full of the feelings of old-school games without relying heavily on robotic chiptunes.

Soar over the world with We’re Bird People Now, an upbeat track with a chipper beat and trumpet that has you imagining rolling fields of green just waiting for you to explore! Or have your heroes search the world for a powerful crystal to the beating drum with Onward!, which uses harps and horns to add a touch of seriousness to the track to help remind your players that they have something to lose if they fail. When your heroes discover a dark and forgotten cave, make sure they’re aware of the possible dangers they could awaken with Through The Grotto’s mysterious slow strings and echo-y chimes. And after the adventure is finished (or when your heroes need a nap!), have them visit a village where Feels Like Home plays with its calming tunes ready to help them relax and recover.

Each track comes in multiple file formats so it’s easy to add right into your game! So if you’ve been waiting to find just the right track for certain scenes in your fantasy adventure, tune in to Bit by Bit Sound - 16 Bit Fantasy Music!