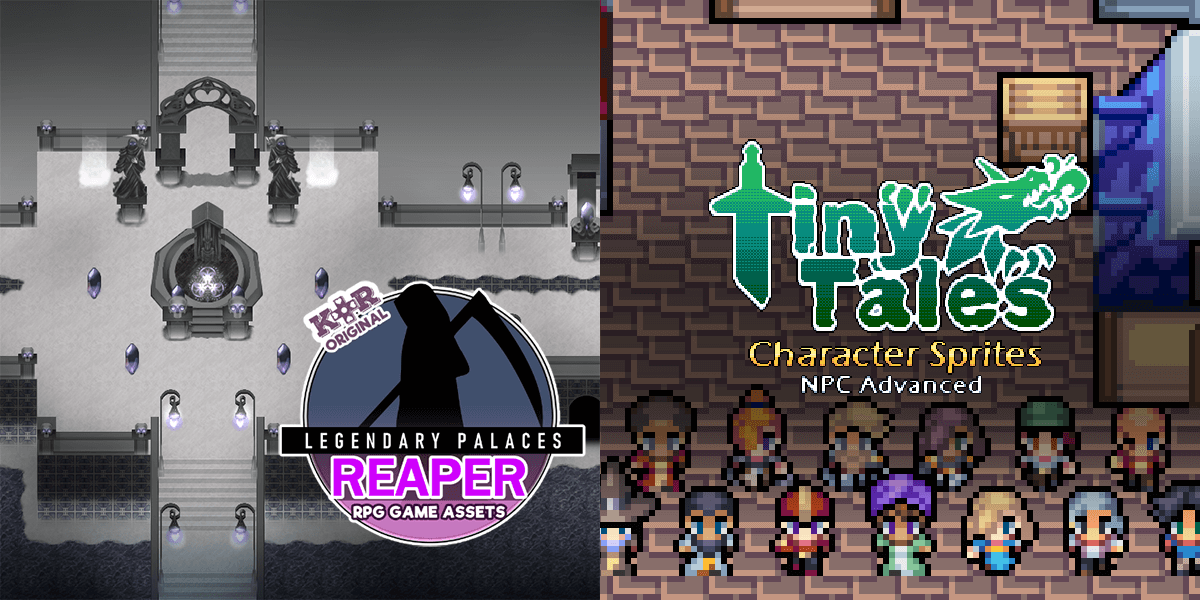 We're back again to expand two Release pack series with some awesome new entries. A brand new Legendary Palaces set, visiting the land of the dead, and a whole bunch of new characters for the Tiny Tales series!

Send shivers down your heroes’ spines when they step into a fearsome new castle with KR Legendary Palaces - Reaper Tileset! Kokoro Reflections is back with another palace set, this time focusing on a grim and spooky underworld. Explore dark throne rooms decorated with looming statues of a grim reaper and courtyards full of dead trees and gravestones, but keep an eye out for spike traps! This deadly castle doesn’t expect you to leave alive.

With a monochrome palette, this tileset feels like it has drained the life out of the world. Deep purple-tinged water and unearthly purple glows are the only pops of color beyond your heroes, making your heroes a prime target for anyone who doesn’t want this dreary place to change. Use special wall tiles that fade into a light grey at the bottom to seamlessly blend the walls into the foggy floors to twist rooms into places where it feels like the whole space could just disappear into a dreamlike fog.

Certain tiles, including archways, statues, and the throne, have a version with a light glow around the bases to blend into the foggy grounds and a version without. These versions are perfect for showing when the area becomes ‘alive’ or when your heroes have accidentally released the castle’s cruel ruler who had been sealed away for centuries. This pack also includes some fog overlays, so that you can add another level to your reaper palace’s spookiness! Create an ethereal underworld castle with KR Legendary Palaces - Reaper Tileset!

Create busy towns and castles with MT Tiny Tales Character Sprites NPC Advanced! Mega Tiles latest release is stuffed with adorable character sprites to help you populate your retro games. Fill your taverns with adventurers, your battlefields with knights, and your castles with nobles so that your heroes never feel lonely when they visit new locations.

With more than 150 sprites to choose from, it’s easy to make sure your towns don’t suffer from identical twins living next to each other! Station bandana-wearing sailors around a city’s port while lightly armored soldiers patrol alleyways, keeping an eye out for scarred rogues or angry warriors dressed like vikings. In taverns or shopping in the marketplace you can place townsfolk in simple outfits and with different hairstyles, from young girls with ponytails to older merchants with a large balding spot where his luscious hair used to be. Use some of the heavily armored knight sprites to keep your towns safe, or have them join your heroes on their adventure. Each knight has two sprites, one where they’re wearing a helmet and one without, meaning you could have cutscenes where the mysterious knight is revealed or just have the off-duty soldiers be more comfortable without their horned helmets. When your heroes visit a kingdom’s castle, make sure that they say hello to the grey-haired king wearing an impressive crown or to the princess in a silver circlet before they start exploring the rooms where well-dressed noblewomen and men meet for business.

Each sprite comes in 3 sizes (original, 2x, and 3x) so you can add them right into your favorite engine without needing to change a thing. And if all those options weren’t enough, this pack also includes base templates so that you can create your own custom characters! So if you’ve been wanting some more pixelated people to choose from or just love the Tiny Tales style, make sure to check out MT Tiny Tales Character Sprites NPC Advanced!

There has been an update to the Degica Dream Pack MV - Modern pack to fix a bug.

For Steam users the files in your DLC folder will be automatically updated. Just replace the file in your projects from the DLC folder. For Degica Shop users, please redownload this file from your purchase email.