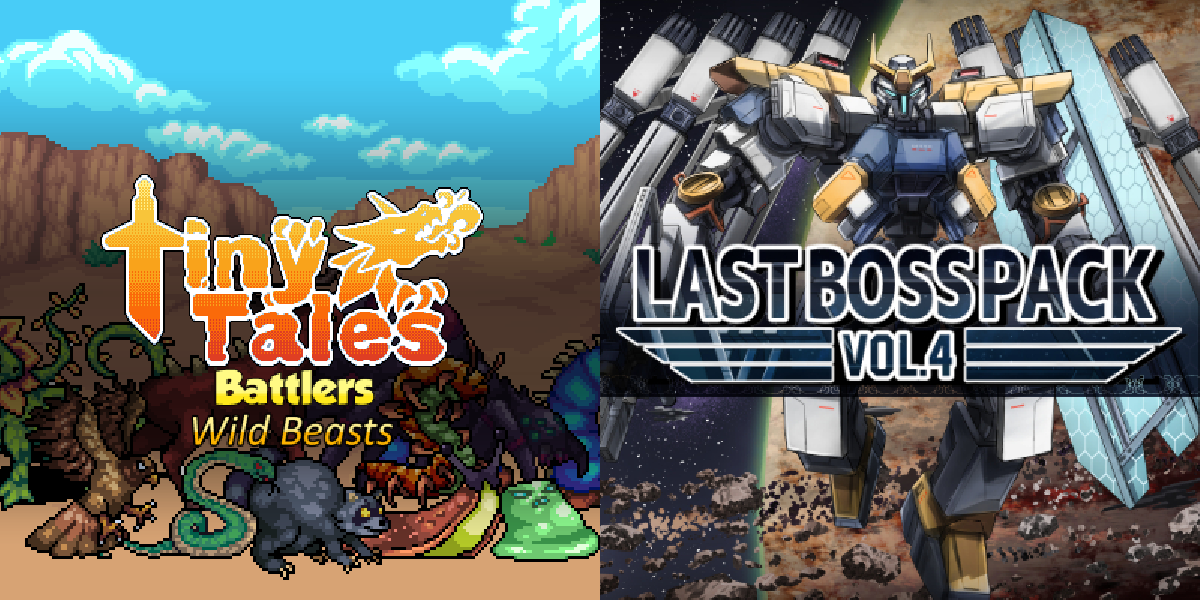 It's the new year! And you know what that means: Accidentally writing 2022 on everything for the next several weeks! But while you get that done, you can also power up your games with two new releases.

Battle against nature with MT Tiny Tales Battlers - Wild Beasts! Mega Tiles is back with their adorable pixel art style, this time sharing 18 monsters to fill your game worlds with wildlife. Have your heroes face off against red-winged vampire bats, deer with elemental antlers, chubby raccoons, deadly spiders, and more with this pack!

Snake, slime, and bee enemies are perfect if you want to keep battles familiar for RPG lovers, and add your own spin with odd enemies such as shell-less snails, cockatrices, and plant-themed lizards. Or turn a cave into an acranophobe’s nightmare with three different types of spiders! Fill your forest maps with deer, foxes, birds, and bees, and give your caverns creepy-crawlies including centipede-like bugs and worms that burst out of the ground! Each beast comes with a battler and sprite, so your heroes can see and try to avoid unnecessary fights while exploring the areas. And if that wasn’t enough, every monster has multiple color variations, meaning this pack contains a whopping 90 creatures to choose from! Use the different colored slimes to show their elemental resistances, or choose a fitting color for the toothy worm that matches the dungeon’s themes.

Each image comes in 3 sizes (original, 2x, and 3x), so it’s easy to find a size that will fit your game’s resolution! Add even more creatures to battle against (or tame!) with MT Tiny Tales Battlers - Wild Beasts!

Give your sci-fi heroes some incredible robots to battle against with the Last Boss Pack Vol.4! Gee-kun-soft latest battler pack focuses on mechas and armored humanoid robots, with battlers, sprites, and background images to help bring your sci-fi worlds to life! With 10 different robot builds and variations for each to choose from, your players will be able to face robots on land, on sea, in the sky, and even in space! Challenge a red samurai robot to a duel in a dangerous city or have your players try to escape a mecha with four legs that let it roll on land and float on water without slowing down, all while a dark purple robot looms in the distance as the final challenge. Don’t leave your players without a robot of their own, give them a white and blue paladin robot or speedy fighter jet that can help them escape a deadly situation.

Each robot has a matching sprite, so you can let your players control their own mecha while exploring destroyed cities or space! 14 backgrounds (with two sizes, 816 x 624 and 1000 x 740) give you some out of this world choices for locations of battles and cutscenes. Let your players hang out on the streets of a skyscraper-filled town or on a ship’s deck while floating in space, or force them to survive battles in waste-filled worlds or in space while explosions burst in the background!

This pack also includes 26 bonus images with the ready-to-battle robots placed into the backgrounds, perfect for introducing your players to their latest foe before a fight! Show the samurai robot sending powerful sword slashes towards the screen before starting a battle, or have the villain’s dark mecha launch a barrage of missiles in a cutscene to force your players down onto a wasteland planet. So if you need some more robots for your epic sci-fi story or want to add some scenes from a mecha show to your modern game, check out the Last Boss Pack Vol.4!