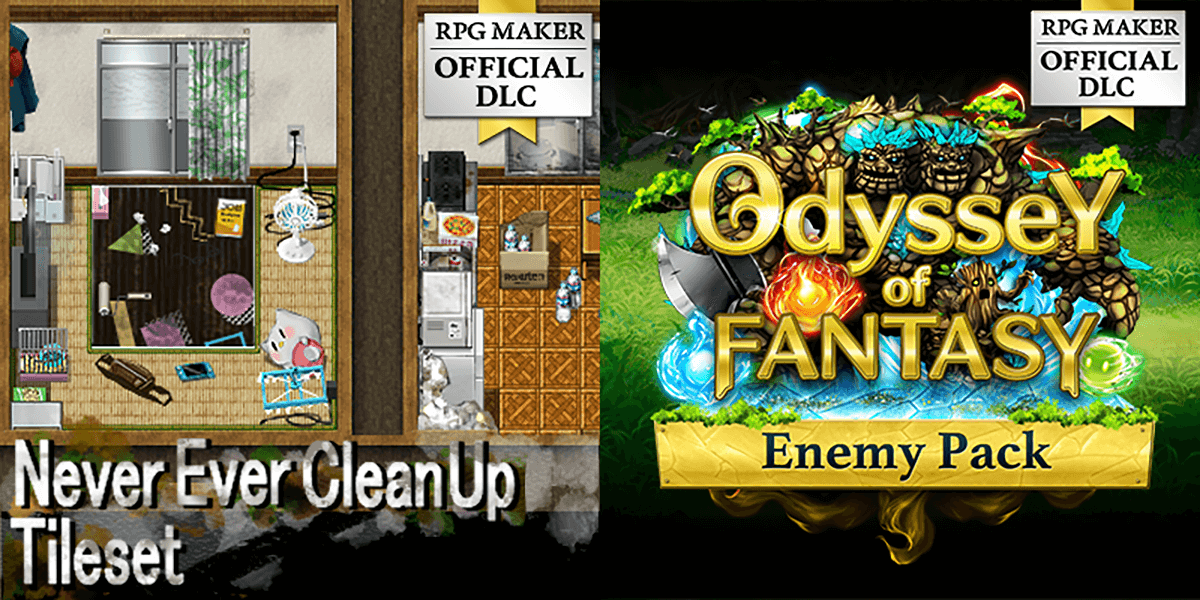 Sometimes, you get busy on your projects and things get a bit messy... well this release day we have a tileset to make maps in your game messy, plus a whole mess of new enemies!

Do you think your interior maps are too clean? Have you been trying to show that someone skips chores or that a place has been abandoned? Then it’s time to check out the Never Ever Clean Up Tileset! Wataru Nakanami has created decorative tiles for MV and MZ that can help add even more humanity to your maps with kitchen knick-knacks, hobby items, and more. The pack includes a filled B sheet for fantasy worlds and one for modern stories, making it easy to find the perfect addition no matter your game!

Grab the fantasy sheet to help stock a doctor’s office with shiny metal tools and stacks of books that haven’t been properly placed back in the bookcase, or a seamstress’s room with a wooden spinning wheel and old-fashioned sewing machine. Create the home of a gardener filled with potted plants and tools hanging on the wall, all lit by the soft glow of colorful lanterns. There are also translucent windows that you can add to certain shelves that can help tell stories all on their own. Have expensive books locked away behind closed panels, or show that thieves have already been here by having shattered glass in front of empty shelves.

A modern setting can use the other sheet to turn boring rooms into filled apartments. Give your gamer NPC a multi-screen computer setup, with all of their electronics plugged into the closest outlet. Or give a home chef a proper kitchen with dark marble countertops and a four-burner range. This sheet includes two versions of certain tiles (clean and dirty), making it easy to show that some teens threw a party while their parents were away and forgot to clean up the pizza boxes, or just how much effort your hero went to turn a disgusting apartment into a livable place. And if all those tiles weren’t enough, this pack also includes some sprites to bring some gross and grimy movement to your maps! Have cockroaches run around the ground when your heroes explore the city sewers, or show that a room is disgusting by having swarms of flies and writhing maggots near rotting food. So if you’ve been thinking your maps are a touch too sterile, or just want to add some grime to your lazy NPCs’ rooms, pick up the Never Ever Clean Up Tileset!

While the cause your heroes are fighting for is what makes your game interesting, the enemies they face on that way are what makes the actual fighting exciting!

With the Odyssey of Fantasy Enemy Pack you get 46 new obstaclesfor your party to overcome on their journey. Watch out when you enter the goblin territory, as they not only have standard little soldiers, but also archers, warriors, a general wielding a massive ax, a king that seems to possess spiritual powers and shaman-like wizards which wield their totem staff and one of five different magical orbs ready to attack! Better look closely to find out which element you need to resist, they could possess fire, water, thunder, grass or darkness powers!

And in the same fashion as the goblins, there is also a full orc tribe ready for your heroes visit! And the pattern of those five elements is woven into the whole pack, not only do the orc wizards fight with those as well, but there are also several other elemental creatures in here that have their own unique version for each element: There are cute elemental orbs, but also hauntingly beautiful female elemental spirits and dragons.

The whole set is rounded up by various ents, from a small stump to a normal sized one with a bushy crown to a bare one to a giant old one wielding spiritual powers plus more dragons, such as a baby dragon, a general dragon leading the armies of evil and a powerful yet elegant royal while king dragon. Your heroes should have their gear ready when they meet those, but the battles will be legendary!

This plugin has had a couple of updates.

For Degica Shop users, please redownload the plugin from your download email. For Steam users the version in your DLC folder will be automatically updated. In both cases, replace the plugin in individual projects to upgrade to the new version.