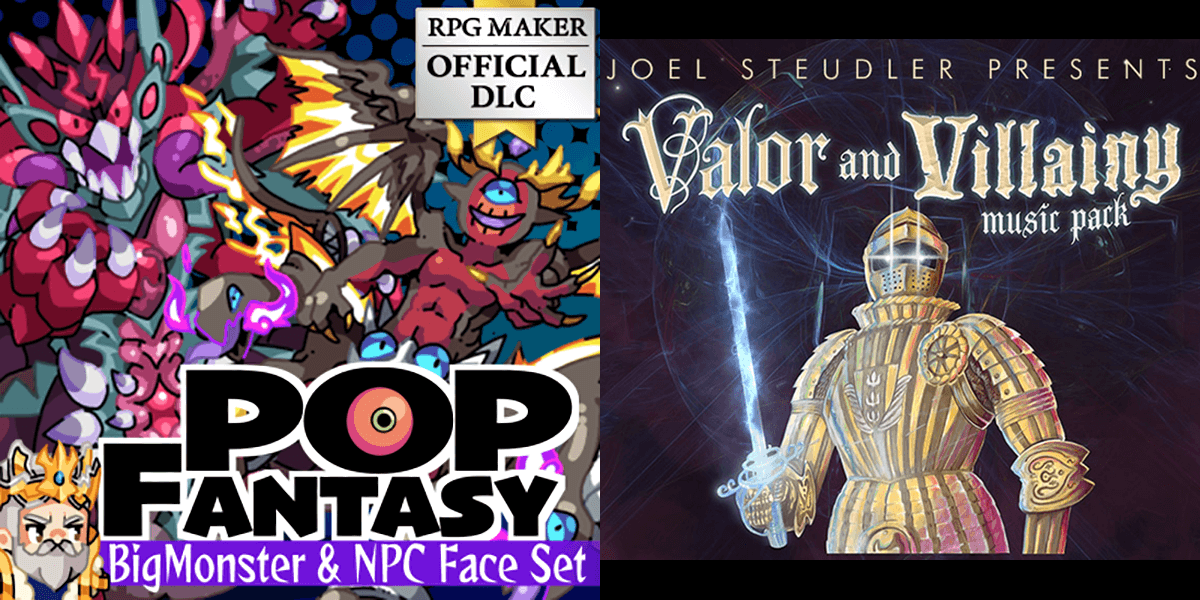 Release day is here again! For our first pack, we have an expansion on the previous Pop Fantasy Battler and Face Set Pack, and to go along with it we have a brand new set of tracks from RPG Maker Music Pack veteran Joel Steudler!

Did you like the Pop Fantasy Battler and Face Set Pack and crave more? Or are you just looking for some super cute facesets and battlers for your game?

Then be ready for the Pop Fantasy BigMonster and NPC FaceSet pack!

For an idea of what is included, just take a look at the Big Monster Battlers and all the People and Nature facesets in MV and MZ and you will know the characters you are getting! You have never seen the Irongiant as cuddly or a God of light that was as huggable - fierce and totally adorable at the same time!

These redraws give a new spin on all these Monsters and since their sprites are contained in the makers by default, you won’t have any problem with incorporating or missing matching graphics. On top of that, all of the NPC faces are loaded with lovely character as well and allowing you to have the full line up of the appearing characters in your game that all have a faceset in this style! With their big round eyes and chubby cheeks they are as adorable as the default characters can get and will give your game an unique look while using the default sprites!

Check out these sweeties and be ready for them to steal your heart!

The line between Hero and Villain can at times be very thin. Joel Steudler is back and he brings another fantastic set of tracks with The Valor and Villainy Music Pack featuring ten brand new epic pieces!

Three of them are geared towards battles, giving you the tools to bring various moods to your fights. Looking closer at one of those battle themes, we have “Endless Enemies”, where gentle strings lie on top of more heavy tunes, a both heroic and grim track that grasps the feeling of fighting a never ending fight.

Other items in this pack are designed perfectly for various story environments, such as “Sacred Sepulcher”, with drums and strings fusing to create a magical atmosphere that would fit the burial site of an important hero from legendary times.

The pack also includes three more character or party driven themes: with “Infamous Evildoer” being the perfect piece that plays whenever your antagonist enters the screen, with epic orchestral music porting his power and presence. “Noble Defenders” on the other hand is much friendlier, with soft tunes combined with more strong parts, perfectly to underlie your upright and determined party on their way to face this or another enemy and let highlight them in their strongest moments.

But that isn't the only way these tracks can be used. There are many more ways you can use these tracks, just turn them on, and let them carry your thoughts… this music in combination with your own setting will lead to some legendary scenarios the people of your world will talk about for centuries!