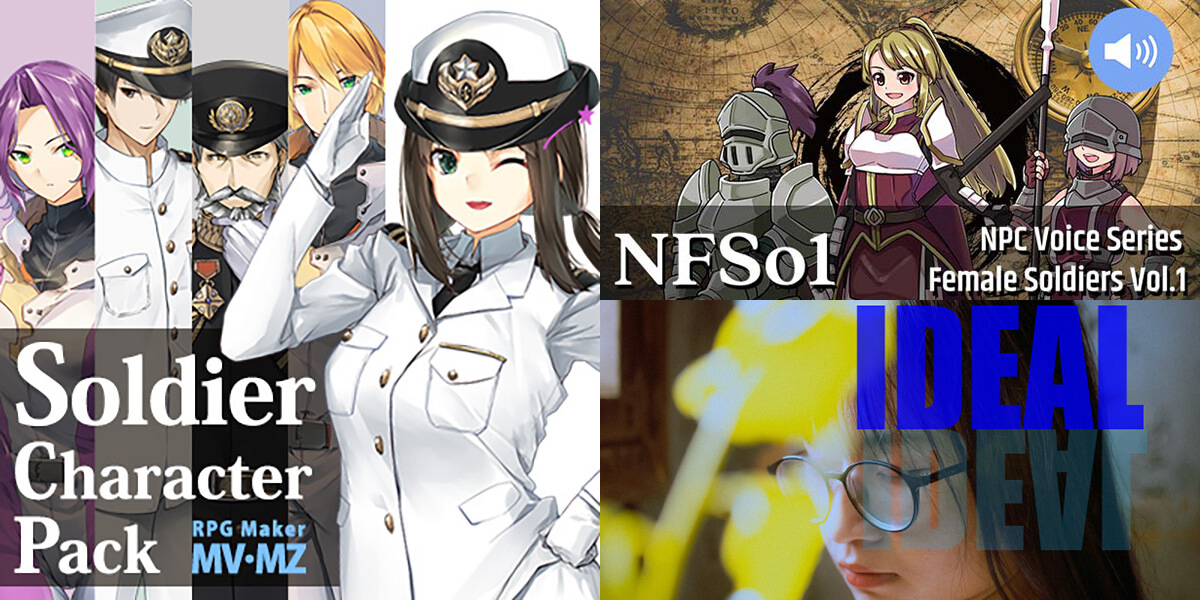 Sometimes it is hard to make a game, but you just have to soldier on. And this weeks releases are here to help, with two soldier themed packs, plus a new modern style soundtrack!

Ten-hut devs! It’s time to storm the battlefield with new characters from the Soldier Character Pack! Choose from 16 characters to lead your players to military success, whether it’s on land, on sea, or in space! Each soldier comes with a sprite, enemy image, faceset, bust, and sv battler! And if that wasn’t enough, every character comes in 2 variations, one wearing a hat or helmet and one without, so you can switch it up when your characters need to be more formal or when they’re kicking back and relaxing.

Dressed in crisp black and white uniforms, 10 of this pack’s characters are prepared to join your heroes in a modern tale of bravery and monster-butt kicking! Turn your players into brunette male or female recruits and have them befriend the other soldiers in the barracks, whether they’re the cheerful blonde flirting with the others or the serious raven-haired man who has something to prove. And when it’s time to receive their next orders, have your heroes visit the gray-haired and resolute commanders in their metal-decorated jackets.

But what if your game takes place in a sci-fi world of spaceships and intergalactic battles? No worries, because this pack includes 6 characters specifically designed for it! Team up the serious purple-haired female space soldier with the blue-haired boy genius to fix a damaged panel outside the ship, while the starry-eyed sharpshooter fends off drones with the help of the academy’s red-headed bad boy.

This pack also includes 16 high-res images of the characters as a bonus, so you can find even more places to use them in your game, along with 6 SV weapons to give your party some new equipment for battles! Prepare your game world for war with the Soldier Character Pack!

Give your battle-ready female characters some fitting voices with the NPC Female Soldiers Vol1! TK.Projects suited up and jumped into making a new pack of Japanese voices, this time focusing on character voices that could be found out on the battlefield. Forget the squeaky voices of children, this pack’s 120 SEs include more mature voices for your favorite ladies. Find the perfect voices for your game’s female guards, knights, and generals in this pack!

12 unique character voices offer up a plethora of possibilities in your game. Even if your city guards all wear the same uniform, make them stand out with their own personalities displayed through their voices! Perhaps your heroes need to go through a gate guarded by two female soldiers, one serious and the other friendly, and your players need to choose the right dialogue choices to talk their way past the guards. Or maybe the SEs just add some extra pizzazz to a cutscene your heroes can listen in on between the nervous new recruit and the tired veteran. Give the powerful lady knight in your party some voice cues during battles, or save them for the times your party takes a break to relax around the campfire! This pack comes with multiple audio formats so you can drop the SEs right into your projects, so what are you waiting for? Add some extra chatter to your game’s barracks with the NPC Female Soldiers Vol1!

Dive into a cyberspace world with the thrilling tracks of IDEAL! ayato sound create’s latest music pack brings you 24 tracks to bring your modern game into the 21st century. Featuring slick instrumentals and energetic electronic beats, this pack is sure to put your players right into the action!

Kick off your hero’s adventure by having them jump straight into cyberspace, where Now Online plays a consistent drum beat and chiptune-inspired tunes keep the mood cheery while the digital world loads around your players. Fight against hackers and virus-turned-monster foes while high-energy techno tracks like Battlefield and IDEAL race in the background, or turn battles into problem-solving moments by slowing things down with the waves of electronic hums from Anxiety.

When it’s time for something less intense grab Intermission, with its bass guitar strumming a nice melody for your heroes to enjoy while they visit the local virtual hangout. Or have your hero take some time to hop offline and meet friends in the real world to compare notes while Secret Account’s piano plays a jazzy track in the background. The slow whistle-like music of Massage is perfect when your hero needs to take a break from all the hustle and bustle, and the electronic beeps and boops of More and More are ready to meet them once they’re jumping back into cyberspace! Each track comes in multiple file formats, making it simple to add into your favorite engine. Fill your modern and sci-fi worlds with toe-tapping techno from IDEAL!