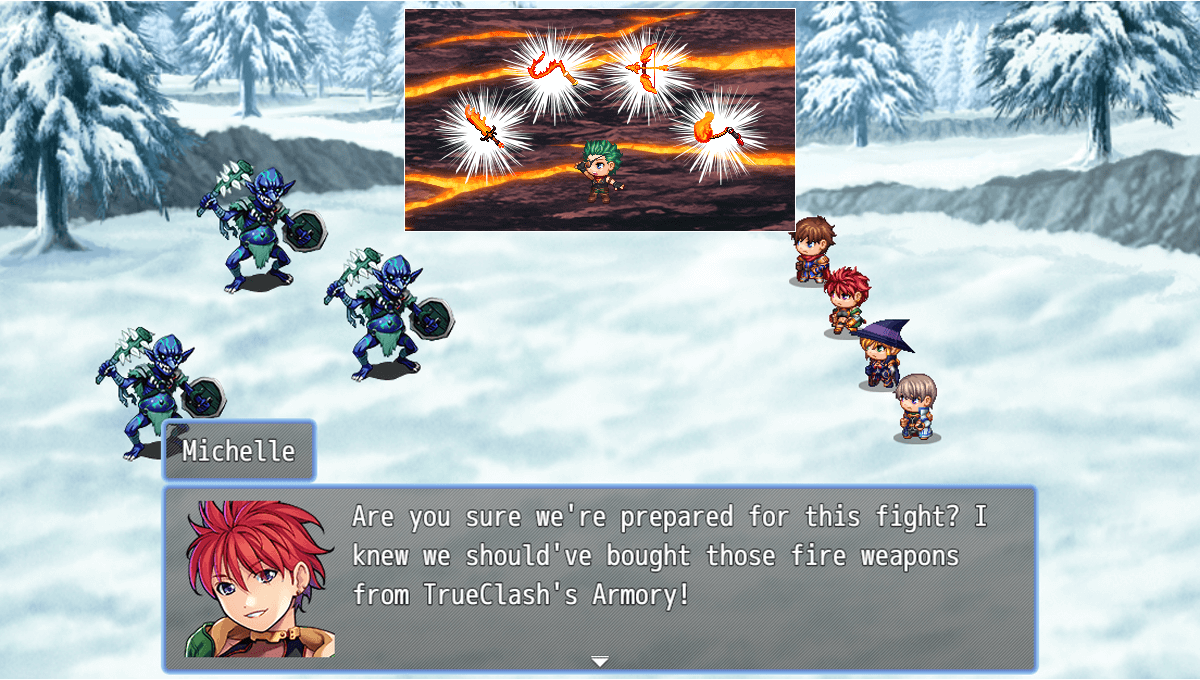 Finding the perfect weapon for sideview battles can be tough, so it’s always great to find a new source. That’s why today we’ll be checking out True Clash’s Armory!

‍TrueClash’s Armory contains 7 sheets of MV weapons to help you equip your heroes with the perfect weapon! Choose from normal weapons and elemental options to perfectly equip your heroes when fighting against different foes. Give your poor knight a sword that’s not decorated with gold or show off just how rich your noble companion is with a blade with an ornate guard. Or show just how strong your berserker is by having them swing around a three-headed mace or huge double-headed ax. Replace the default spear with a trident, a rapier, or even a dagger that stabs into the enemy instead of just dealing some light slashing damage.

Don’t forget about your martial artists or archers! Pick a pair of swinging nunchucks or a bow with an arrow that’s been set on fire to match your characters’ personalities. Even mages have a few staff options, with jewel-topped staffs or staves with a bat-shaped metal decoration to choose from.

Have been wanting to give your weapons an ‘ice’ update? Then pick up the ice and cold weapon sheets to fill all your cool blue needs. Give your enemies frostbite when stabbed with a sleek guard-less dagger or crushed by a spiked ball of ice turned into a flail. Arm your warriors with a greatsword carved from a giant icicle or a frigid iceberg-turned-battleax.

Some of the cold weapons can also double as water weapons, with their deeper blue tones a great match for underwater warriors. Add a magical mace where the mace head is replaced with a ball of water and a blue metal spear that has sleek barbs to make sure that fish you attacked can’t escape easily!

On the other end of the elemental scale, the fire weapons are ready to send your foes to the grave in a blaze of glory! With burning reds and oranges decorating these weapons, it’s clear that these were forged in the center of a volcano. Give your thief a dagger whose blade is shaped like a flame, or let your magic users do some physical damage with an on-fire whip! The fire sword, flail, ax, and staff each come in two versions, one with extra flames and one without, so you could choose to have more powerful versions or weapons that are even more likely to inflict a burn state.

So if you’ve been wanting to add some new weapons to your roster, or just want to replace the default weapon sheets with something different, make sure to check out True Clash’s resource thread!